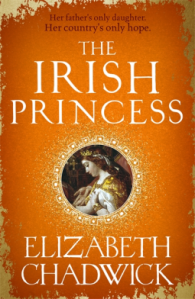 I love Elizabeth Chadwick’s books and some of her very best, in my opinion, are the ones she has written about William Marshal – described as ‘the greatest knight that ever lived’ – and his family. In The Scarlet Lion we met William’s wife, Isabelle de Clare; now The Irish Princess tells the story of Isabelle’s parents, Richard de Clare and Aoife MacMurchada. There’s not really a lot of historical information available on Aoife (even how and when she died is unknown) but I know that Elizabeth Chadwick is an author who does her research and I’m sure this novel is as accurate as she could possibly make it.

Born in Ireland in the middle of the 12th century, Aoife is the daughter of Diarmait MacMurchada, King of Leinster. Growing up during a turbulent period of Irish history, Aoife is loved by her father but also valuable to him as a way of forming alliances with those who may be able to help him gain power. When his lands are invaded by a rival and he loses his kingdom of Leinster, Diarmait is forced to flee to Wales and then to England, where he seeks the help of King Henry II. Henry gives him permission to recruit men to try to reclaim his lands – and one of those who agrees to join him is Richard de Clare, lord of Striguil.

Richard had fought on the ‘wrong side’ in the recent civil war between Henry II’s mother, Empress Matilda, and her cousin, King Stephen. Now that Henry has come to the throne of England, Richard, who had been one of Stephen’s supporters, has found himself disinherited and out of favour with the new king. When Diarmait offers him Aoife as a wife in return for his assistance in Ireland, Richard sees this as an opportunity to regain power and influence. But this is no unhappy, forced marriage; when Aoife meets the man who is to become her new husband, she finds that he is a man she is able to love and trust.

I liked Aoife and thought she was a great subject for historical fiction, particularly as she’s somebody who isn’t written about very often. Although it may seem at first that she is little more than a pawn to be used in the schemes of men, it quickly becomes clear that Aoife has a mind of her own and is quite capable of coming up with her own plans and schemes, especially in her dealings with Henry II, in order to get what she wants from life. Richard proves to be the perfect partner for her; although they don’t always see eye to eye they treat each other with respect and I loved watching them settle into their marriage over the course of the novel. Richard, nicknamed Strongbow (thought to be derived from the word ‘Striguil’ rather than a reference to his skill with a bow), is also an interesting character in his own right and I enjoyed getting to know him as well as Aoife.

Although the relationship between Aoife and Richard is at the heart of the novel – there is a stronger romantic element here than in Chadwick’s last few books, I think – their personal stories fit seamlessly into the history of the period and the events of the Anglo-Norman invasion of Ireland are clearly described so you should find it all easy enough to follow even if, like me, you start the novel with little or no knowledge. I don’t think I would rank this book amongst my favourites by Elizabeth Chadwick as I found it a bit too long for the story being told and slightly repetitive at times, but it’s still a very enjoyable read and a good opportunity to meet two historical characters who are rarely given much attention.

Thanks to Little, Brown Book Group UK for providing a copy of this book for review via NetGalley.

9 thoughts on “The Irish Princess by Elizabeth Chadwick”