One of the things I love about reading historical fiction is that it gives me an opportunity to learn about times and places about which I previously knew nothing at all.

In the last few years I have read about subjects as diverse as the Narváez expedition to the New World (The Moor’s Account by Laila Lalami), the Siege of Constantinople (Master of Shadows by Neil Oliver) and the Opium Wars (the Ibis Trilogy by Amitav Ghosh). I have visited, through fiction, 17th century Mughal India (The Twentieth Wife by Indu Sundaresan), 18th century Portugal (The Devil on her Tongue by Linda Holeman) and 15th century Iceland (To Lie with Lions by Dorothy Dunnett).

Much as I enjoy reading about new places, it can also be nice to read books with a more familiar setting. As I’m English I tend to read a lot of historical fiction novels set in England but most of them focus on London and the South. Living in the North East of England, it’s not often that I come across historical fiction set in my part of the country, which is a shame as it’s an area with plenty of history to write about! Here are a few historical novels I’ve thought of that are set at least partly in Northumberland or County Durham:

Edwin: High King of Britain and Oswald: Return of the King by Edoardo Albert – These are the first two books in a fascinating trilogy telling the story of the 7th century kings of Northumbria.

Lion of Alnwick by Carol Wensby-Scott (and the sequels Lion Dormant and Lion Invincible, which I haven’t read yet) – Set in the 14th and 15th centuries, this trilogy follows the story of the Percy family, Earls of Northumberland in the years leading up to the Wars of the Roses.

The Lymond Chronicles by Dorothy Dunnett – This series takes us all over 16th century Europe, North Africa and beyond, but Northumberland also features in several of the books as some of the main characters live near Hexham on the fictional estate of Flaw Valleys.

The Queen’s Promise by Lyn Andrews – This is a novel about the relationship between Anne Boleyn and Henry Percy, son of the 5th Earl of Northumberland. The book focuses more on Henry than Anne, so large sections of the story are set in Northumberland. 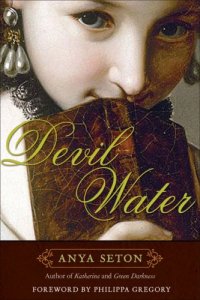 Red Rose, White Rose by Joanna Hickson – Cecily Neville (mother of Edward IV and Richard III) was known as the Rose of Raby and the early chapters of this novel are set in the area surrounding Raby Castle in County Durham.

Devil Water by Anya Seton – This is the story of Charles Radcliffe, brother of the Earl of Derwentwater, who marries a Northumberland girl called Meg Snowdon. The Radcliffes were real historical figures and were involved in the Jacobite rebellion of 1715.

If anyone knows of any more examples, I would love to hear what they are.

And now it’s your turn to tell me:

Do you prefer to read books set in places you know or places you don’t know?

Can you think of any historical fiction novels set in your own town/city or part of your country? If you live somewhere like London there will be hundreds, so in that case – which is your favourite?

11 thoughts on “Historical Musings #14: Close to home or far away”