I do enjoy reading about the Tudors but in recent years I’ve discovered that I find the Plantagenets much more interesting. On this page I’ve linked to my reviews of all the books I’ve read set in the Plantagenet period since I started blogging. These cover the reigns of: Henry II, Richard I, King John, Henry III, Edward I, Edward II, Edward III, Richard II, Henry IV and Henry V. I’ve devoted a separate page to the Wars of the Roses. 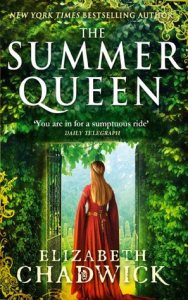 The Summer Queen by Elizabeth Chadwick

The first in a trilogy of novels about Eleanor of Aquitaine, this book follows Eleanor’s early life including her troubled marriage to King Louis VII of France and the beginnings of her relationship with Henry II of England. If you’ve never read about Eleanor before, this trilogy could be a perfect introduction. 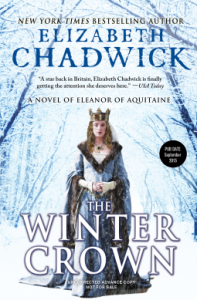 The Winter Crown by Elizabeth Chadwick

This is the second book in Chadwick’s Eleanor of Aquitaine trilogy. Beginning with the early years of Eleanor’s marriage to Henry II, this novel takes us through the deterioration of their relationship, the births of their children and the uprising of their sons against Henry, and Henry’s feud with Thomas Becket. A great continuation to the trilogy.

The Autumn Throne by Elizabeth Chadwick

The trilogy ends by taking us through the final thirty years of Eleanor’s life – her time in captivity, the death of Henry II and the reigns of her sons Richard I and King John are all covered. 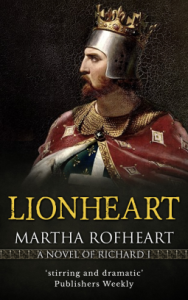 A fictional account of the life of King Richard I of England as seen from the perspectives of five different people: his mistress, Blondelza; his mercenary captain, Mercadier; his mother, Eleanor of Aquitaine; his wife, Berengaria of Navarre; and his foster-brother and scribe, Alexander. I learned a lot from this novel, not just about Richard the Lionheart himself, but also about medieval life, courtly love, troubadours and chivalry.

The Queen’s Man by Sharon Penman

This is the first of Sharon Penman’s series of Justin de Quincy mystery novels and is set during the reign of Richard the Lionheart. In this first volume, Justin witnesses a murder which could have implications for the future of the English throne. Not as satisfying as Penman’s big historical novels, but still an enjoyable read.

The Greatest Knight by Elizabeth Chadwick

This novel is based on the life of William Marshal, one of the most important knights of the medieval period. I loved Chadwick’s depiction of William and if the real man was anything like the fictional one, then he really deserved the title of ‘the greatest knight’. This is the first of two books on William and covers only half of his story. 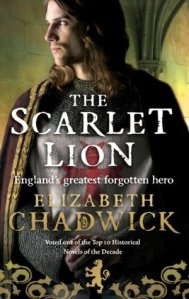 The Scarlet Lion by Elizabeth Chadwick

William Marshal’s story is concluded in this second novel, a sequel to The Greatest Knight which also works as a standalone. The book takes us through the remainder of William’s life and career, during the reigns of Richard I, King John and Henry III. There is also a lot of focus on his wife, Isabelle de Clare.

In this book, Chadwick returns to the story of William Marshal, this time focusing on one particular episode from his life: his pilgrimage to Jerusalem in 1183.

The Champion by Elizabeth Chadwick

Another Chadwick novel, but one featuring fictional characters and events this time. The book is set in 12th century England, France and Wales. I learned a huge amount about jousts, tournaments and other knightly pursuits! 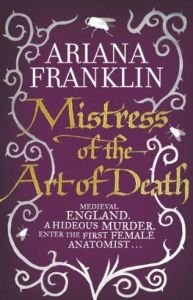 Mistress of the Art of Death by Ariana Franklin

A medieval mystery novel and the first in a series featuring Adelia Aguilar, an Italian doctor. In this first instalment, Adelia travels to England to investigate the disappearances of several young children from their homes in Cambridge.

A classic historical novel following the story of Wilfred of Ivanhoe, a disinherited knight who becomes swept up in a series of adventures involving feuding Saxon and Norman noblemen, a beautiful Jewish girl, Robin Hood and a mysterious Black Knight. Much easier to read and much more fun than I’d expected!

Here Be Dragons by Sharon Penman

The first in Penman’s Welsh Princes trilogy, this is a fictional account of the lives of King John’s daughter, Joanna, and her Welsh husband, Llewelyn ab Iorweth (Llewelyn the Great). An excellent novel covering a fascinating period of history from both a Welsh and an English perspective.

Lady of Hay by Barbara Erskine

This novel is split between two time periods: in the modern day, journalist Jo Clifford undergoes hypnotic regression as part of her research for a magazine article and discovers that in a previous life she was Matilda de Braose, a 12th century noblewoman who lived during the time of King John. I loved the historical storyline but unpleasant characters and a far-fetched plot made the present day thread less enjoyable. 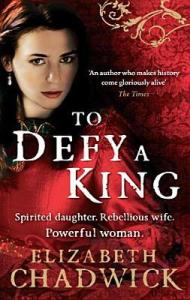 To Defy a King by Elizabeth Chadwick

Yes, it’s another Elizabeth Chadwick novel! This one tells the story of Mahelt Marshal, the daughter of William Marshal, hero of The Greatest Knight. As England descends into war and turmoil during the reign of King John, Mahelt finds herself in a situation where she must choose between her own family, the Marshals, and the family of her husband, Hugh Bigod.

The Devil and King John by Philip Lindsay

A fictional biography of King John, taking us through all the significant moments of his life and reign. This is a largely sympathetic portrayal of John, based around the idea that the Angevins were descended from a witch and that John frequently becomes ‘possessed by the devil’, leading him to commit violent or ill-judged actions. Not a great read, but interesting in parts.

Falls the Shadow by Sharon Penman

The second book in the Welsh Princes trilogy. This one focuses on Simon de Montfort, 6th Earl of Leicester, the French nobleman who ruled England for more than a year after leading a rebellion against King Henry III in 1264. I loved this book and thought the ending was heartbreaking! 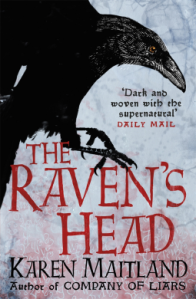 The Raven’s Head by Karen Maitland

A dark tale of magic and alchemy, murder and blackmail, set in the early thirteenth century. This is an eerie and atmospheric book, but the supernatural element was a bit too strong for my taste.

A Triple Knot by Emma Campion

A novel about Joan of Kent, a cousin of Edward III and future wife of the Black Prince. It was good to read about a woman who is not often the subject of historical fiction, but I found the book slightly boring and too concerned with Joan’s romantic relationships.

The Shadow Queen by Anne O’Brien

Another version of Joan of Kent’s life story. Again, this deals mainly with the subject of Joan’s three marriages – to Thomas Holland, William Montagu and the Black Prince – but I found it a better written and more enjoyable novel than Emma Campion’s.

The People’s Queen by Vanora Bennett

The story of Alice Perrers, mistress to King Edward III. This is not the light, romantic novel you might expect from the cover; there’s a lot of focus on trade, business and Alice’s money-making schemes. The poet, Geoffrey Chaucer, is also given a lot of attention. I can’t say that I enjoyed this book, but it was still an interesting read.

A fictional account of Isabella of France, covering her marriage to Edward II, her growing disillusionment at finding that her husband cares more for his favourites than his wife or his kingdom, her relationship with Roger Mortimer and eventual rebellion. This was a quick and fairly light read, but I didn’t like the writing style. 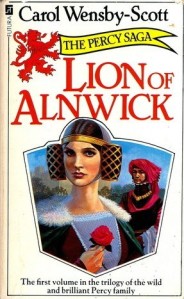 Lion of Alnwick by Carol Wensby-Scott

Covering the period from 1357-1409, this is the story of Henry (Hal) Percy, 1st Earl of Northumberland. This is a complex and detailed historical novel, the first in a trilogy. I can highly recommend this book (despite the terrible front cover) but it’s out of print so may be difficult to find.

The Vanishing Witch by Karen Maitland

Set against a backdrop of the 1381 Peasants’ Revolt, this novel follows the stories of two fictional families. Witchcraft and superstition are woven into the twisting, turning plot. An entertaining read, though with less focus on the history of the period than I would have liked.

The King’s Sister by Anne O’Brien

A light, entertaining historical novel based on the life of Elizabeth of Lancaster, daughter of John of Gaunt. Elizabeth’s husband is a half-brother of Richard II; her own brother is the man who deposes Richard and becomes Henry IV. Where will she decide her loyalties lie? This is a long book but I found it quite enjoyable.

A Burnable Book by Bruce Holsinger

A thriller revolving around a search for a book of prophecies which may predict the death of King Richard II. Our hero is John Gower, poet and spy, a friend of Geoffrey Chaucer’s. This is the first of two (so far) John Gower mysteries.

The Invention of Fire by Bruce Holsinger

John Gower is back to investigate a second mystery: the murder of sixteen men found dead in a London privy one night in 1386. The cause of death is found to be a weapon few people in England have seen or heard of – the newly invented handgonne. 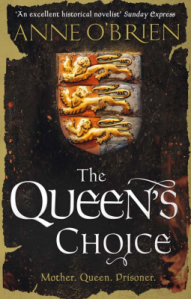 The Queen’s Choice by Anne O’Brien

This novel tells the story of one of England’s little known queens: Joanna of Navarre, wife of Henry IV. A light but enjoyable read, particularly as I have never read about Joanna before. 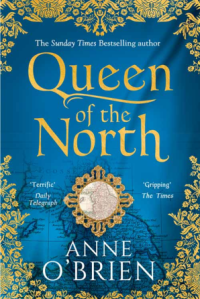 Queen of the North by Anne O’Brien

Probably my favourite of Anne O’Brien’s books. This one is set partly in my part of the country – the North East of England – during the late 14th and early 15th centuries. It follows the stories of Elizabeth Mortimer and her famous husband, Harry Hotspur.

The Plantagenets by Dan Jones

A factual account of the period, beginning in 1120 with the wreck of the White Ship and the Anarchy, and taking us through the reigns of all of the Plantagenet kings until Richard II was deposed in 1399. This is a fascinating book and Dan Jones’ lively writing style makes it as much fun to read as fiction. 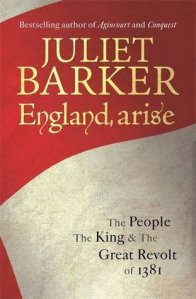 This book explores the Great Revolt of 1381. As well as explaining the causes of the revolt, describing the revolt itself and discussing the aftermath, Barker also gives some insights into the daily lives of 14th century people. I enjoyed this book and learned a lot from it. 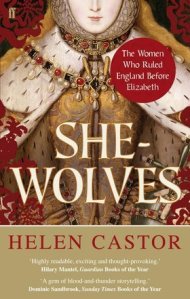 She-Wolves: The Women Who Ruled England Before Elizabeth by Helen Castor

The lives of four medieval queens – Empress Matilda, Eleanor of Aquitaine, Isabella of France and Margaret of Anjou – are all explored in this book. A final section looks at the reigns of Mary I and Elizabeth I and how they may have been influenced by those earlier queens who attempted to rule England.

2 thoughts on “The Plantagenets”