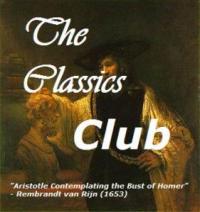 I mentioned last week that I had finished my current Classics Club list and would probably be posting a second one…and here it is! I have decided to list 50 books this time rather than 100 as that will give me more flexibility and more time to read other books as well. We have five years to complete our lists, so as I’m starting from today that means my finish date will be 14th November 2022 – how far away that seems! I’ve included a mixture of books that I’m hoping will be fun to read, books that sound much more challenging and books that I know very little about but are by authors I’ve wanted to try for a while.

1. The Black Sheep by Honoré de Balzac
2. The Long Ships by Frans G Bengtsson
3. The White Guard by Mikhail Bulgakov
4. Death Comes for the Archbishop by Willa Cather
5. Jezebel’s Daughter by Wilkie Collins
6. Dombey and Son by Charles Dickens
7. Nicholas Nickleby by Charles Dickens
8. The Brothers Karamazov by Fyodor Dostoevsky
9. La Reine Margot by Alexandre Dumas
10. Chicot the Jester by Alexandre Dumas
11. Castle Dor by Daphne du Maurier
12. Don’t Look Now and Other Stories by Daphne du Maurier
13. Daniel Deronda by George Eliot
14. Moonfleet by John Meade Falkner
15. The Brontes Went to Woolworths by Rachel Ferguson
16. The Fifth Queen by Ford Madox Ford
17. A Passage to India by E.M. Forster
18. Black Narcissus by Rumer Godden
19. Claudius the God by Robert Graves
20. Desperate Remedies by Thomas Hardy
21. Two on a Tower by Thomas Hardy
22. In a Dark Wood Wandering by Hella S Haasse
23. The Crowded Street by Winifred Holtby
24. Goodbye Mr Chips by James Hilton
25. The Galliard by Margaret Irwin
26. The Europeans by Henry James
27. How Green Was My Valley by Richard Llewellyn
28. The Betrothed by Alessandro Manzoni
29. Of Human Bondage by W Somerset Maugham
30. The Corn King and the Spring Queen by Naomi Mitchison
31. That Lady by Kate O’Brien
32. The World is Not Enough by Zoe Oldenbourg
33. I Will Repay by Baroness Emmuska Orczy
34. The Scottish Chiefs by Jane Porter
35. Jane and Prudence by Barbara Pym
36. The Cloister and the Hearth by Charles Reade
37. Fire from Heaven by Mary Renault
38. Bardelys the Magnificent by Rafael Sabatini
39. Sandokan: The Tigers of Mompracem by Emilio Salgari
40. The Pirate by Sir Walter Scott
41. The Turquoise by Anya Seton
42. The Grapes of Wrath by John Steinbeck
43. The Black Arrow by Robert Louis Stevenson
44. A Game of Hide and Seek by Elizabeth Taylor
45. High Rising by Angela Thirkell
46. The Prime Minister by Anthony Trollope
47. The Duke’s Children by Anthony Trollope
48. The Fountain Overflows by Rebecca West
49. The Chrysalids by John Wyndham
50. Germinal by Emile Zola

What do you think? Have you read any of these?

I am just in time to take part in the latest Classics Club Spin! The idea of the spin is to choose twenty unread books from your Classics Club list and number them from 1-20. On Friday 17th November, the Classics Club will choose a number and that is the book you need to read before the end of the year.

As I haven’t read any of the books on my new list yet, I’m just going to use the first twenty books above as my Spin list. If I get #10 I will probably read #9 instead as they are part of a series, but otherwise I don’t mind which number comes up. Now I just need to wait until Friday to find out what I’ll be reading!

38 thoughts on “Classics Club List #2 – and another Classics Spin!”