This week’s Top Ten Tuesday, hosted by That Artsy Reader Girl, asks for ten books on our spring TBR. I’m sometimes hesitant to make lists like this because saying that I’m planning to read a book seems to guarantee that I won’t do it. There are still four books from the winter TBR list I posted in November that I haven’t read yet. Anyway, here are ten books that I really do intend to read in the next few months!

This was the book chosen for me in the recent Classics Club Spin, so I need to read it before the end of April.

Cytherea has taken a position as lady’s maid to the eccentric arch-intriguer Miss Aldclyffe. On discovering that the man she loves, Edward Springrove, is already engaged to his cousin, Cytherea comes under the influence of Miss Aldclyffe’s fascinating, manipulative steward Manston.

Blackmail, murder and romance are among the ingredients of Hardy’s first published novel, and in it he draws blithely on the ‘sensation novel’ perfected by Wilkie Collins. Several perceptive critics praised the author as a novelist with a future when Desperate Remedies appeared anonymously in 1871. In its depiction of country life and insight into psychology and sexuality it already bears the unmistakable imprint of Hardy’s genius.

In the house of Helios, god of the sun and mightiest of the Titans, a daughter is born. But Circe is a strange child – not powerful, like her father, nor viciously alluring like her mother. Turning to the world of mortals for companionship, she discovers that she does possess power – the power of witchcraft, which can transform rivals into monsters and menace the gods themselves.

Threatened, Zeus banishes her to a deserted island, where she hones her occult craft, tames wild beasts and crosses paths with many of the most famous figures in all of mythology, including the Minotaur, Daedalus and his doomed son Icarus, the murderous Medea, and, of course, wily Odysseus.

But there is danger, too, for a woman who stands alone, and Circe unwittingly draws the wrath of both men and gods, ultimately finding herself pitted against one of the most terrifying and vengeful of the Olympians. To protect what she loves most, Circe must summon all her strength and choose, once and for all, whether she belongs with the gods she is born from, or the mortals she has come to love.

3. The Illumination of Ursula Flight by Anna-Marie Crowhurst (2018)

Another review copy received from NetGalley.

Born on the night of an ill-auguring comet just before Charles II’s Restoration, Ursula Flight has a difficult future written in the stars.

Against the custom of the age she begins an education with her father, who fosters in her a love of reading, writing and astrology.

Following a surprise meeting with an actress, Ursula yearns for the theatre and thus begins her quest to become a playwright despite scoundrels, bounders, bad luck and heartbreak.

And one more NetGalley book.

When Rebecca Palmer’s new husband opens a pharmacy in Victorian Edinburgh, she expects to live the life of a well-heeled gentlewoman. But her ideal is turns to ashes when she discovers her husband is not what he seems. As Rebecca struggles to maintain her dignity in the face of his infidelity and strange sexual desires, Alexander tries to pacify her so-called hysteria with a magical new chemical creation. A wonder-drug he calls heroin.

Rebecca’s journey into addiction takes her further into her past, and her first, lost love, while Alexander looks on, curiously observing his wife’s descent. Meanwhile, Alexander’s desire to profit from his invention leads him down a dangerous path that blurs science, passion, and death. He soon discovers that even the most promising experiments can have unforeseen and deadly consequences…

Reminiscent of the works of Sarah Waters, this is a brilliantly observed piece of Victoriana which deals with the disempowerment of women, addiction, desire, sexual obsession and vengeance.

One of those unread books from my winter list that I do still want to read as soon as possible! 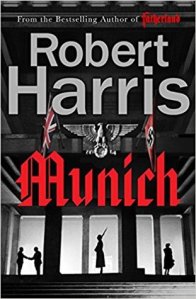 September 1938
Hitler is determined to start a war.
Chamberlain is desperate to preserve the peace.
The issue is to be decided in a city that will forever afterwards be notorious for what takes place there.
Munich.

As Chamberlain’s plane judders over the Channel and the Fürher’s train steams relentlessly south from Berlin, two young men travel with secrets of their own.

Hugh Legat is one of Chamberlain’s private secretaries; Paul Hartmann a German diplomat and member of the anti-Hitler resistance. Great friends at Oxford before Hitler came to power, they haven’t seen one another since they were last in Munich six years earlier. Now. as the future of Europe hangs in the balance, their paths are destined to cross again .

When the stakes are this high, who are you willing to betray? Your friends, your family, your country or your conscience?

The latest Flavia de Luce mystery, The Grave’s a Fine and Private Place, has recently been published but I need to catch up with this one first. 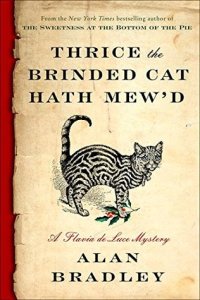 In spite of being ejected from Miss Bodycote’s Female Academy in Canada, twelve-year-old Flavia de Luce is excited to be sailing home to England. But instead of a joyous homecoming, she is greeted on the docks with unfortunate news: Her father has fallen ill, and a hospital visit will have to wait while he rests. But with Flavia’s blasted sisters and insufferable cousin underfoot, Buckshaw now seems both too empty—and not empty enough.

Only too eager to run an errand for the vicar’s wife, Flavia hops on her trusty bicycle, Gladys, to deliver a message to a reclusive wood-carver. Finding the front door ajar, Flavia enters and stumbles upon the poor man’s body hanging upside down on the back of his bedroom door. The only living creature in the house is a feline that shows little interest in the disturbing scene. Curiosity may not kill this cat, but Flavia is energized at the prospect of a new investigation. It’s amazing what the discovery of a corpse can do for one’s spirits. But what awaits Flavia will shake her to the very core.

It’s been a while since I last read any of Guy Gavriel Kay’s books so I would like to read this one soon.

It begins simply. Shen Tai, son of an illustrious general serving the Emperor of Kitai, has spent two years honoring the memory of his late father by burying the bones of the dead from both armies at the site of one of his father’s last great battles. In recognition of his labors and his filial piety, an unlikely source has sent him a dangerous gift: 250 Sardian horses.

You give a man one of the famed Sardian horses to reward him greatly. You give him four or five to exalt him above his fellows, propel him towards rank, and earn him jealousy, possibly mortal jealousy. Two hundred and fifty is an unthinkable gift, a gift to overwhelm an emperor.

Wisely, the gift comes with the stipulation that Tai must claim the horses in person. Otherwise he would probably be dead already…

For the last three years I have joined in with Lory’s Elizabeth Goudge Day; she isn’t hosting one this year but I will still be celebrating Goudge’s birthday in April.

Unable to bear the prospect of a life at sea, young Anthony O’Connell deserts his ship at Torquay and escapes into the Devonshire countryside under a new name. When Stella Sprigg, adopted daughter of a local farmer, encounters ‘Zachary’, the pair instantly know they are destined to be together.

Intertwined with the local legend of St. Michael’s Chapel, Stella and Zachary’s story takes them from the secluded Devonshire valley to the perilous Mediterranean seas and finally to the poverty and squalor of eighteenth-century London.

Having recently re-read Penmarric (review coming soon), I’m looking forward to continuing my Howatch re-reads with Cashelmara and then The Wheel of Fortune.

There were two subjects which lonely widower Edward de Salis never discussed: his dead wife and his family home in Ireland, ‘matchless Cashelmara’. So when he meets Marguerite, a bright young American with whom he can talk freely about both, he is able to love again and takes her back to Ireland as his wife. But Marguerite soon discovers that married life is not what she expected, and that she has married into a troubled family bitterly divided by love and hatred. Cashelmara becomes the curse of three generations as they play out their fates in a spellbinding drama, which moves inexorably towards murder and retribution.

Another book from my Classics Club list. I started to read it earlier this year but the time wasn’t right and I’m ready for another attempt now.

Despite his mysterious antecedents, an unscrupulous financial speculator, Ferdinand Lopez, aspires to marry into respectability and wealth and join the ranks of British society. One of the nineteenth century’s most memorable outsiders, Lopez’s story is set against that of the ultimate insider, Plantagenet Palliser, Duke of Omnium, who reluctantly accepts the highest office of state, becoming “the greatest man in the greatest country in the world.”

The Prime Minister is the fifth in Trollope’s six-volume Palliser series and a wonderfully subtle portrait of a marriage, political expediency, and misplaced love.

Have you read any of these? What do you have on your own spring TBR?

24 thoughts on “Top Ten Tuesday: Books on my Spring TBR”