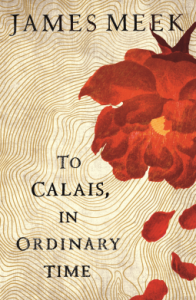 It’s 1348, two years after England’s victory over France at the battle of Crécy, which led to the capture of the French port of Calais. And it is to Calais that we are headed in James Meek’s latest novel, in the company of a large and diverse group of characters.

First, there’s Lady Bernadine, a young noblewoman betrothed to a man her father’s age. Dreaming of the sort of love described in her favourite poem, Le Roman de la Rose, Bernadine has run away from her home and her arranged marriage in pursuit of the man she hopes to marry instead, the knight Laurence Haket. Haket has raised a band of archers to send to the English garrison at Calais and they are all on their way to Melcombe in Dorset where their ship awaits.

The newest recruit to the company of archers is Will Quate, a young bondsman from Bernadine’s village, Outen Green. Will hopes that Bernadine’s father, Sir Guy, will grant him his freedom in return for serving with the bowmen. The other archers are rough, battle-hardened men who were together at Crécy and are not the most pleasant of people, as Will quickly discovers – but it seems that they will not go unpunished for the crimes they have committed.

Finally, we meet Thomas Pitkerro, a Scottish proctor who has been working at the papal court in Avignon and is returning there after carrying out a commission at Malmesbury Abbey in England. The Abbot has asked him to travel with the archers and to listen to their confessions as the nearest thing to a priest they will have. And they certainly have a lot to confess!

To Calais, in Ordinary Time doesn’t have a huge amount of plot – the whole story consists of the journey through the south of England towards Melcombe, but there’s still a lot going on. We get to know more about the archers and the girl known as Cess who has come back with them from France; the characters find themselves asked to perform in a morality play; and there’s an exploration of identity and gender through the story of Hab the swineherd and his ‘sister’ Madlen. Meanwhile, unknown to the characters, every step they take towards Calais is taking them closer to the Black Death, the great pestilence coming in the opposite direction. The choice of Melcombe as the point where they will embark for France is significant because Melcombe will become known as the ‘Plague Port’ – one of the first locations where the Black Death would enter England. You can find parallels with modern catastrophes (James Meek has said that he was thinking of climate change) but any comparisons are lightly drawn and they are more something to keep in mind rather than an important part of the story.

But the most notable aspect of this book – and one you’ll probably either love or hate – is the language. Meek uses three very distinct styles to convey the different backgrounds and social classes of each of the three main characters or groups of characters. Thomas Pitkerro’s narrative, mainly in the form of letters to his friends in Avignon, is written in very formal prose with long sentences and big words, evoking the Latin used by the clergy at that time. As an English noblewoman in the 14th century, Bernadine would have spoken a form of Norman French, so this is indicated by peppering her speech with words like the French negative ‘ne’ (‘you ne understand’, ‘ne speak his name’). The others – Will, Hab and the archers – speak in their local Cotswold dialect (‘they say steven in place of voice, and shrift and housel for confession and absolution, and bead for prayer’). They also say neb for face, which I found quite jarring as where I live it means nose!

While I appreciated the imaginativeness and cleverness behind all of this, I have to admit that I just found it a distraction. Ironically, instead of helping to immerse me in the setting and the story, it kept pulling me back into the present day and reminding me that I was reading a modern work of fiction. As I’ve said, though, I’m sure other readers will love the use of language and so will probably enjoy this book a lot more than I did. It’s the sort of book I would expect to see being nominated for awards; it just wasn’t right for me personally.

Thanks to Canongate Books for providing a copy of this book for review via NetGalley.

13 thoughts on “To Calais, in Ordinary Time by James Meek”