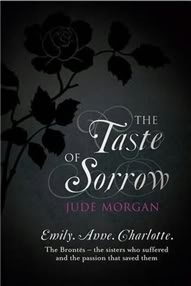 The Taste of Sorrow is a fictional retelling of the lives of Charlotte, Emily and Anne Brontë, beginning with their childhoods and ending just after Charlotte’s wedding. Before I started reading this book if you’d asked me how much I already knew about the Brontës, I would have said I knew very little. And yet a lot of the story felt familiar to me – their early attempts at writing stories set in the fantasy worlds of Angria and Gondal, their experiences of working as governesses, their brother Branwell’s alcoholism – so I must have known more than I thought.

Although The Taste of Sorrow does seem to stick to the historical facts as far as I could tell, it’s important to remember that this is a novel and not a biography. Jude Morgan brings the Brontë sisters to life by giving us insights into their feelings and emotions, their hopes and dreams. His fictional Brontës are realistic, complex and three-dimensional, and would have been interesting characters to read about even if they had not been based on real people. We can obviously never know exactly what thoughts would have gone through the minds of the real Charlotte, Emily and Anne, but I had no problem believing that they may really have said and done the things that Morgan has imagined them to have said and done. And that’s the highest praise I can give to an author writing this type of historical fiction.

The Taste of Sorrow, as the title suggests, is not the happiest of books. The Brontës had a lot of sorrow in their lives, beginning with the death of their mother and two elder sisters, Maria and Elizabeth. They also had to deal with the usual challenges and obstacles that came with being a woman in the 19th century. When Charlotte suggested that she would like to be an author she was discouraged by her father simply because she was female. Instead, Mr Brontë pinned all his hopes on his son, Branwell.

I had read very little about Branwell before I started this book, though I knew he had caused his family a lot of pain because of his drinking. I thought Morgan portrayed him quite sympathetically, attempting to show the pressures and disappointments that contributed to his downfall, and how his sisters struggled to reconcile their love for him with their despair in him. Although I couldn’t like Branwell, his character felt as real to me as the characters of Charlotte, Emily and Anne.

The book itself is very well written, although the style is unusual and takes a while to get used to, but the strong point of the book is the characterisation and each sister is shown as having her own distinct personality. Morgan does focus more on Charlotte than the other two, though I can see that as the sister who outlived the others it probably made sense to tell most of the story from her perspective. But my favourite Brontë book is Wuthering Heights (I love it even more than Jane Eyre, which I know puts me in a minority within the book blogging world) and for that reason, the sister I was most interesting in reading about was Emily. Although we don’t get to spend as much time with Emily as we do with Charlotte, I thought Morgan’s portrayal of her was excellent and I could easily believe that his Emily was the person who wrote Wuthering Heights.

I was also pleased to see that Morgan does give Anne a lot of attention and she is not shown as being in any way inferior or less important than her sisters. Personally I loved both of Anne’s books, The Tenant of Wildfell Hall and Agnes Grey, and I think it’s sad to see how often she is overlooked or dismissed.

The Taste of Sorrow will obviously be of particular interest to Brontë fans, but I think it would also be enjoyed by a wider audience as an interesting and compelling historical fiction novel in its own right. Now I just need to read the remaining two Brontë novels I still haven’t read: The Professor and Shirley. 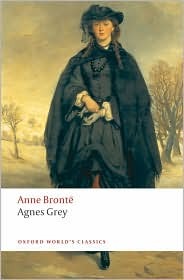 After reading The Tenant of Wildfell Hall earlier this year, I wanted to read Anne Bronte’s other book, Agnes Grey.  I approached it with trepidation having read some quite negative reviews of it.  However, I was pleased to find that I enjoyed the book.  Although I didn’t think it was as good as The Tenant and it didn’t have the feel of a must-read classic like Jane Eyre or Wuthering Heights, there was still a lot to like about Agnes Grey.

The plot is simple, plain and linear.  It’s the story of a young woman in 19th century England who goes out to work as a governess when her family fall on hard times. Unfortunately Tom, Mary Ann and Fanny Bloomfield are three of the most badly-behaved children imaginable. When her short, unhappy time with the Bloomfields comes to an end, Agnes finds another situation with two older pupils, Rosalie and Matilda Murray. This second position is not much better than the first – the Murray girls are selfish and thoughtless and the only thing that makes Agnes’s life bearable is her friendship with Mr Weston, the village curate.

Agnes Grey has an autobiographical feel because Anne Bronte herself had worked as a governess and was able to draw on her own personal experiences to show how servants were often treated with cruelty and contempt by their employers. I could sympathise with Agnes as I would soon have lost my patience with the spoilt Bloomfield children and the self-centred, inconsiderate Murrays. I also thought it was unfair that the parents expected Agnes to control their children without actually giving her any real authority over them. It was such a difficult position to be in.  However, I found it slightly disappointing that Agnes seemed prepared to just accept things the way they were and not do anything to change the situation.  The book was more about tolerance and perseverance than about taking action to try to make things better.

Another of the book’s themes is the importance of morality, virtuousness and goodness, qualities in which the Bloomfield and Murray families seem to be sadly lacking, leading Agnes to feel isolated and miserable.  However, I think many readers will find Agnes too self-righteous and superior, so if you prefer your heroines to be flawed and imperfect this probably isn’t the book for you!  Reading about the day to day life of a governess is not particularly exciting or dramatic, but I still found the book enjoyable and interesting – and at under 200 pages a very quick read compared to many of the other Bronte books. 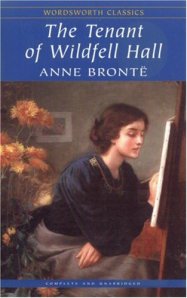 Although Emily Bronte’s Wuthering Heights and Charlotte Bronte’s Jane Eyre have always been two of my favourite Victorian classics, this is the first time I’ve read anything by the youngest Bronte sister, Anne. I feel a bit guilty that it has taken me so long to get round to reading one of Anne’s books, especially as I enjoyed it almost as much as the other two books I’ve just mentioned.

Anne’s writing style is not the same as Charlotte’s or Emily’s – there’s less dramatic romanticism and poetic imagery, although she still writes with a lot of passion. She has quite a sharp style that is probably more similar to Jane Austen than to either of her sisters.

I won’t go into the plot in too much detail but The Tenant of Wildfell Hall is the story of Helen Huntingdon, a young woman who leaves her alcoholic husband and goes into hiding with her five year-old son, Arthur. Not long after arriving at Wildfell Hall she meets local farmer, Gilbert Markham, who falls in love with her. When Gilbert questions her about the rumours circulating about her in the village, she allows him to read her diary in which she had recorded the details of her unhappy marriage.

The book has an interesting structure – it’s told partly in the form of letters from Gilbert Markham to his brother-in-law Jack Halford, and partly as extracts from Helen Huntingdon’s diary. I loved the first section from Gilbert’s point of view, describing the arrival of the mysterious woman at Wildfell Hall with everyone wondering who she was and where she came from. The story probably wouldn’t have worked had it not been set in the 19th century. Today there’s nothing unusual in a single mother living alone with her little boy, but in 1828 when The Tenant of Wildfell Hall takes place, it makes her the target of gossip and scandal.

When Helen’s diary began it took me a while to get used to the change of voice and the change of pace but it soon developed into the most powerful section of the book. I didn’t particularly like Helen as I thought she was just a little bit too saintly and perfect, but she was a very strong person who defied convention to do what she thought was best for herself and her child. Her diary entries are filled with descriptions of some really despicable characters and describe scenes of drunkenness, violence, verbal and physical abuse, and adultery, which I can imagine readers in the 19th century would have been shocked by. Apparently after Anne’s death, re-publication of The Tenant of Wildfell Hall was prevented by Charlotte, who considered the choice of subject to be a big mistake. However, I would have no hesitation recommending this book to anyone who has enjoyed Emily and Charlotte’s work, as well as those of you who have never read any other Bronte books.

Note: This book counts towards the Women Unbound Reading Challenge because it portrays a woman who has the strength to leave her abusive husband and build a new life, working as an artist to support herself and her son – almost unheard of in the 19th century.

November 28, 2009April 16, 2010Leave a comment
I won a £10 Amazon voucher with an online survey panel that I belong to, so of course I decided to spend it on some books. The books I chose were Wild Swans: Three Daughters of China by Jung Chang, The Tenant of Wildfell Hall by Anne Bronte and The Haunted Hotel and Other Stories by Wilkie Collins. I want to read the Jung Chang and Anne Bronte books for various challenges I’m participating in (in particular Women Unbound and All About The Brontes) and they’ve been on my wishlist for years anyway. I wanted The Haunted Hotel because I love Wilkie Collins and am trying to read as many of his books as possible.