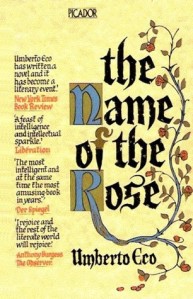 I can’t remember when I first read Umberto Eco’s The Name of the Rose; it was possibly in the early 2000s – long enough ago to have forgotten most of the story, but recently enough that certain scenes have stayed quite clearly in my mind. I knew I hadn’t understood everything the first time, so when I saw that Annabel of Annabookbel was hosting a readalong in January I thought it would be interesting to read it again. Unfortunately, it was a busier month than I expected and I fell too far behind to be able to participate in the readalong, but I have been re-reading the book anyway and finished a few days ago.

The Name of the Rose is set in 1327 and is narrated by Adso of Melk, a Benedictine novice from Austria. I think the best way I can describe the book is to quote directly from the back cover of my old Picador edition: “Whether you’re into Sherlock Holmes, Montaillou, Borges, the nouvelle critique, the Rule of St. Benedict, metaphysics, library design, or The Thing from the Crypt, you’ll love it. Who can that miss out?” It probably misses out quite a lot of people, actually, but at least that gives you a good idea of the range and number of different topics and influences found in the novel.

The story begins with Adso accompanying a Franciscan friar, William of Baskerville, to a remote Benedictine monastery in the Italian mountains. In a few days’ time, this monastery will host a meeting between an embassy from Pope John XXII and a group of Minorites, but preparations are not going according to plan…Adelmo, a young illustrator known for his beautiful illuminated manuscripts, has been found dead, having supposedly fallen from a window of the Aedificium, the large building which houses the abbey’s renowned library. Was it suicide or was it murder? William, who has already impressed the abbot by successfully locating a lost horse, is asked to investigate.

There’s a reason why Eco has given William the name ‘Baskerville’ – as he moves around the abbey asking questions and uncovering the circumstances behind Adelmo’s death, he uses his powers of deduction just like Sherlock Holmes. Adso, of course, fills the position of Dr Watson, needing William to explain things to him as he goes along (which benefits the reader as well). But when a second death occurs, this one more gruesome than the first, William knows that if he is to have any chance of solving the mystery, he will need to gain access to the library – the secret, forbidden library which only the librarian and his assistant are allowed to enter.

As a murder mystery, The Name of the Rose is quite a good one. Reading it for the second time, I remembered the solution and the culprit, but not every detail of the plot, so I enjoyed watching it all unfold again. There are clues – physical and spoken – there are secrets to uncover, complex relationships to untangle and red herrings which point us in the wrong direction for a while. There are also some wonderful descriptions of the library, a genuinely eerie and sinister place; the scenes in which William and Adso explore its labyrinthine passages and chambers are some of the highlights of the book.

But The Name of the Rose is much more than just a medieval mystery novel. It is also a very detailed and erudite study of the religious history of Europe in the early 14th century, which I think is why some people love the book while others struggle with it. At the time of our story, the papacy has moved from its usual home in Rome to Avignon during a period of conflict between the church and the kings of France. From the very beginning of the novel, we are given page after page of information on the divisions within the church and the various orders and sects, such as the controversial movement led by Fra Dolcino, as well as lots of theological discussions on subjects ranging from poverty to whether Jesus ever laughed. The first time I read the book I found myself skimming over most of this to get to the murder mystery parts; this time, I tried to concentrate and understand the religious detail, but Eco’s style does not make it easy to absorb the facts and I admit there was still a lot that went over my head.

I enjoyed my re-read of this book, although I’m not sure whether I really got much more out of it than I did on my first read. I did love revisiting the library scenes, the descriptions of monastery life, and the characters of William and Adso. I have never tried reading any of Umberto Eco’s other books, but maybe I should. Does anyone have a recommendation?