One night in 1899, Benjamin discovers a young woman lying on the ground near Vienna’s mental hospital, naked and bruised, and takes her to the home of his employer, the famous psychoanalyst, Dr Josef Breuer. The girl, whom Dr Breuer names Lilie, insists that she is not human, that she’s just a machine. Her mission, she says, is to destroy a monster. The doctor enlists Benjamin’s help in trying to uncover the truth about his young patient, but both men find themselves increasingly drawn to the mysterious Lilie.

Many years later, in Germany, we meet a spoilt and badly behaved little girl called Krysta. She has recently moved house with her father, another doctor, to be nearer his job working with ‘animal people’ at what Krysta believes is a zoo. Krysta’s father is busy with his work, leaving his daughter to entertain herself by remembering the fairy tales she was told by her old nurse, Greet, and making friends with Daniel, a lonely little boy she discovers eating worms in the grounds of the ‘zoo’. When an unexpected tragedy throws Krysta’s life into turmoil, she learns that Greet’s stories can provide an escape from the horrors that are going on around her.

Well, this is proving to be a very difficult book to write about without giving too much away! Gretel and the Dark is one of those books where it is not immediately obvious what is happening. For a long time I was confused. What was the link between the two storylines? Was Lilie a real person or was she a machine, as she claimed? How did she seem to have so much knowledge of the future? And who was Gretel supposed to be?

I think I spent about 300 of the book’s 350 pages trying to figure out the connection between Krysta and Lilie and coming up with theories, most of which were completely wrong. I only started to guess the truth shortly before it was revealed and when everything began to come together in the final chapters of the book, I discovered that the story I had actually been reading was not quite the one I’d thought I was reading!

Despite the allusions to fairy tales and the fact that some of the main characters are children, this is actually a very, very dark novel. Again, I can’t really discuss any of the issues the book raises because it would be best to know as little as possible before starting to read – though I don’t think it would be too much of a spoiler to say that the place where Krysta’s father works is not really a zoo at all, but something much more sinister. And the fairy tales Krysta recalls throughout the book are not the light, whimsical kind, but the dark and gruesome ones. Hansel and Gretel is one of her favourites and she enjoys using her imagination to push various enemies into the witch’s oven! Later in the book, when something particularly horrible happens to Krysta, another of the tales Greet told her takes on new meaning.

I liked Eliza Granville’s writing but I didn’t find this an easy book to read because some parts of the story were so disturbing and unpleasant. Although it was not a book I could describe as ‘enjoyable’ it was certainly very clever and unusual…and I can almost guarantee you’ll still be thinking about it long after reaching the final page.

Thanks to Penguin Ireland for the review copy. 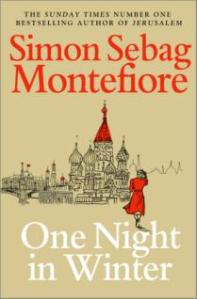 It’s Moscow, June 1945 and a Victory Parade is taking place to celebrate the defeat of Nazi Germany. A group of teenagers, all members of a secret literary society called the Fatal Romantics’ Club, meet on a bridge during the parade to re-enact a duel scene from the poet Pushkin’s Eugene Onegin. It’s supposed to be a game, but something goes tragically wrong and two of them are shot dead.

The secret police begin to investigate at the orders of Stalin himself, but it’s not clear whether the deaths were the result of an accident, a suicide pact or a murder. Because the teenagers involved in the incident are the children of some of the Soviet Union’s highest-ranking officials, they find themselves suspected of conspiring to overthrow the government. When the children are arrested and questioned they discover that the answers they give could incriminate their families and that innocent people could suffer.

More and more people are gradually drawn into the investigation and taken to Moscow’s Lubianka Prison where they are interrogated. As well as the members of the Fatal Romantics’ Club themselves (including eighteen-year-olds Serafima Romashkina, the daughter of a famous actress, and Andrei Kurbsky, son of an ‘Enemy of the People’), questions are also asked of their school teachers, parents and even two younger children aged just ten and six.

One Night in Winter is based on a real incident that occurred in 1943 and as you would expect, some parts of the book are quite harrowing, especially the descriptions of frightened children being made to testify against their own families, knowing that if they say the wrong thing they could be condemning a parent to death. Some of the parents, such as Hercules Satinov, have to continue working with and obeying Stalin even while knowing that he is responsible for the imprisonment of their children.

But this is also a book about love – in many different forms, whether it’s the romantic love between a man and a woman or the special bond between a parent and a child. Almost everyone in the novel seems to be in love with someone else and some of them are involved in secret romances. Over the course of the novel we see how far our characters are prepared to go to protect the ones they love. The secret police believe that a mysterious lover of Serafima’s could hold the key to the whole mystery. And the idea behind the Fatal Romantics’ Club is that “if we cannot live with love, we choose death”.

Simon Sebag Montefiore is a historian and the author of several historical non-fiction books which include a biography of Stalin. It’s obvious that he has an excellent knowledge of the period and its historical figures (Stalin himself has an important role to play in the novel) and his portrayal of life in Stalinist Moscow feels thoroughly researched and authentic. The settings include School 801, the exclusive school attended by all of the children in the story, the interior of Lubianka Prison, the dirty communal apartment where Andrei and his mother live and the luxurious homes of the Bolshevik leaders.

The only thing that was lacking in this novel was emotional impact and I do think this could have been improved if the author had chosen to focus on the viewpoint of just one or two characters, rather than switching between so many different characters. There are such a lot of people to keep track of that I found the character list at the front of the book absolutely essential and while I can understand the reasons for telling the story from different perspectives, it meant I struggled to form any strong emotional connections.

Simon Sebag Montefiore is a new author for me, but I am now interested in reading his other Russian novel, Sashenka.

Anahita (Anni) Chavan’s whole family are gathering at her hill-top bungalow in Darjeeling to celebrate her one-hundredth birthday, but even surrounded by her children, grandchildren and great-grandchildren, there is still one person missing. This is Moh, her beloved son, whom she has not seen since he was a small child. Everyone believes him to be dead…everyone except Anni who is sure that he is still alive somewhere in the world. A year later Anni herself has died, but before her death she had written down her story and entrusted it to her favourite great-grandson, Ari Malik, in the hope that he would try to find out what happened to her missing son.

Anni’s story leads Ari to Astbury Hall in England, where filming is currently taking place for a new period drama set in the 1920s starring the beautiful young American actress, Rebecca Bradley. When Lord Astbury invites her to stay at the Hall for the duration of the filming as a safe haven away from the world’s press, Rebecca gratefully accepts, hoping that the peace and quiet will give her a chance to decide what to do about her equally famous actor boyfriend, Jack, who has just proposed to her.

Soon Rebecca is drawn into Ari’s search for the truth about Anahita’s past and as her tragic story unfolds, we are taken back to India in 1911, where as a young girl Anni becomes friendly with Princess Indira, the daughter of the Maharaja and Maharani of Cooch Behar. She and Indira are sent to school in England just before the beginning of the Great War, and while staying with family friends at Astbury Hall in Devon the relationship Anni forms with Donald Astbury changes her life forever.

This is the third Lucinda Riley novel I’ve read (the other two were The Girl on the Cliff and The Light Behind the Window – I still need to read Hothouse Flower) and it’s my favourite of the three. Although there were times when I found the plot easy to predict and a few coincidences that felt too implausible, there were enough unexpected twists to keep me in suspense wondering what was going to happen next. I particularly loved the parts of the book set in India during the British Raj and also the insights into what life was like for a young woman trying to find a place for herself in a new and unfamiliar country.

Sometimes when a book is set in multiple time periods, the different threads of the story can feel disjointed and unconnected, but that was not the case here. They came together perfectly, with the secrets of Astbury Hall being slowly revealed as Ari and Rebecca discover them. As usual, though, I found myself enjoying the historical sections of the book more than the contemporary ones. The modern day characters do have storylines of their own – Rebecca’s troubled relationship with her boyfriend and Ari’s struggle to find the right balance between his work and his personal life – but they didn’t interest me as much as Anni’s. I thought Lucinda Riley’s writing really came alive in the sections about Anni – the dialogue felt vibrant and the characters were strong and memorable, especially Anni herself, her best friend Indira, and Donald’s cruel and manipulative mother, Maud Astbury, the villain of the book.

The Midnight Rose is a long novel (650 pages – and it’s one of those books that is physically big and heavy too) but once I became swept up into the story I stopped thinking about the number of pages and concentrated on enjoying Anahita Chavan’s fascinating tale.