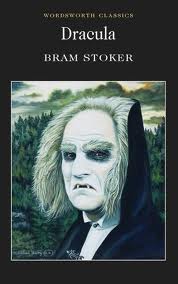 “My friend. – Welcome to the Carpathians. I am anxiously expecting you.”

When Jonathan Harker travels to Count Dracula’s castle in Transylvania to advise the Count on the subject of buying property in England, he quickly becomes aware that there’s something not quite normal about his host – and after making some terrifying discoveries, he finds himself imprisoned in the castle. Back in England, Harker’s fiancée Mina Murray is anxiously waiting in Whitby for news of Jonathan. But as if she didn’t already have enough to worry about, her friend Lucy Westenra becomes mysteriously ill, with inexplicable puncture wounds on her throat. Could Lucy’s illness have anything to do with the ship that was recently swept into the harbour during a storm?

Interspersed with the main storyline are Dr Seward’s medical notes on one of his patients, a man called Renfield who likes to eat flies and spiders – but what is the connection between Renfield, Lucy and Dracula? Dr Seward brings in his friend Van Helsing, an expert in unusual diseases, and with the help of Mina, Jonathan, Lucy’s fiance Arthur Holmwood and a friend, Quincey Morris, they attempt to solve the mystery and defeat Dracula.

Dracula was an obvious choice for me for the RIP challenge, particularly as it’s one of those books I feel as if I should have read years ago, yet never have (apart from a children’s version which doesn’t really count as it was so heavily abridged). Yet even though I had never read it, a lot of the story was familiar as it has become so firmly entrenched in popular culture. Dracula is not the first vampire story (a few weeks ago I wrote about John Polidori’s The Vampyre and Byron’s Fragment of a Novel) but it’s definitely the most famous.

The book is written in an epistolary style with the entire story being told through letters, journal entries, telegrams and newspaper reports. This structure kept the story moving forward and it was interesting to see so many different perspectives, but I did feel that some of the entries were too short and the story kept switching too abruptly from one person’s journal to another. I would have liked to have spent longer with one character before switching to the next. Some of the ‘voices’ were very similar, but I really liked the character of Mina, who was a strong, sensible, intelligent woman and although she was subjected to the usual Victorian attitudes of the time, she played an important role in the story. In comparison, Lucy is more of a typical Victorian heroine.

The opening section in Transylvania was my favourite part of the book. I loved the atmosphere Stoker created, with the snow falling and the wolves howling.

Though we were in shelter, we could hear the rising wind, for it moaned and whistled through the rocks, and the branches of the trees crashed together as we swept along. It grew colder and colder still, and fine, powdery snow began to fall, so that soon we and all around us were covered with a white blanket. The keen wind still carried the howling of the dogs, though this grew fainter as we went on our way. The baying of the wolves sounded nearer and nearer, as though they were closing round on us from every side. I grew dreadfully afraid, and the horses shared my fear.

When the story moved from Transylvania to Whitby, the pace slowed down and I started to get bored. I did enjoy all the descriptions of Whitby though, with its harbour and ruined abbey. Whitby is only a couple of hours’ drive from where I live, so we go there a lot, and it’s always nice to read about a place you know well.

I actually didn’t find the book very frightening, though maybe that’s just because I was already so familiar with the story. There were some very creepy scenes though, such as when Harker sees Dracula emerging through a window and crawling headfirst down the castle walls:

I was at first interested and somewhat amused, for it is wonderful how small a matter will interest and amuse a man when he is a prisoner. But my very feelings changed to repulsion and terror when I saw the whole man slowly emerge from the window and begin to crawl down the castle wall over the dreadful abyss, face down with his cloak spreading out around him like great wings…I saw the fingers and toes grasp the corners of the stones, worn clear of the mortar by the stress of years, and by thus using every projection and inequality move downwards with considerable speed, just as a lizard moves along a wall.

I’m glad I finally read Dracula, but it’s not going to become a favourite classic of mine. Although I didn’t love it, I thought it was surprisingly easy to read and the first few chapters were great, so if you have any interest at all in vampire stories or gothic horror novels, I think it’s worth reading at least once.