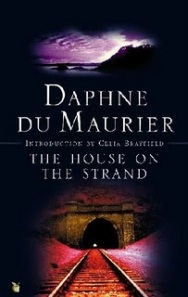 Dick Young is at a turning point in his life. He has recently left his job at a London publishing firm and needs to decide what he wants from his future. He’s been offered another job in New York and his American wife Vita wants him to accept it, but Dick’s not so sure. When his friend Professor Magnus Lane invites him to stay at his farmhouse in Cornwall for the summer, he agrees, looking forward to a few days of peace before Vita and his two stepsons join him. But when Dick arrives at Kilmarth, Magnus convinces him to take part in a secret experiment: he has developed a new drug which allows the user to travel back in time – and he wants Dick to test it for him…

Choosing to begin 2011 with a book by one of my favourite authors was the right decision. The House on the Strand is a strange and unusual book which blends historical fiction, science fiction, time travel and psychology. I loved it! In fact, it might even make my best of 2011 list at the end of the year. Although Rebecca is still my favourite Daphne du Maurier book, this one ties with The Scapegoat as my second favourite. It actually has a very similar mood and feel to The Scapegoat even though the plots of the two books are entirely different. Both books have a male narrator and both have themes of identity and escaping from reality.

I enjoy reading about time travel and this book took a slightly different approach to the question of time travel than any other book I’ve read. Rather than physically going back in time, it’s only Dick’s mind that travels while his body stays in the present – and as you can imagine, this has some disastrous and embarrassing results. The 14th century world that Dick witnesses when under the influence of the drug seems completely vivid and real to him, yet he’s unable to interact with any of the people he meets. He feels a special connection with Roger Kylmerth, steward to the Champernoune family, and also with the beautiful Isolda Carminowe. As Dick’s fascination with Roger and Isolda grows, he spends more and more time in the past and becomes increasingly dependent on the drug.

Du Maurier wrote this book in the late 1960s when psychedelic drugs such as LSD were at the height of their popularity and the drug which Magnus invents seems to be very similar to what I’ve read about LSD. As Dick becomes psychologically addicted to the drug, he gradually grows more distant and withdrawn and his relationships with his family start to suffer. His life in the present is portrayed as dull and boring in comparison to the vivid events of the 14th century and when seen through Dick’s eyes, Vita and her two sons are unlikeable and obnoxious. To me though, they were normal, reasonable people who were trying to make sense of their husband and stepfather’s bizarre behaviour.

Despite my own interest in history and historical fiction, I didn’t find the 14th century subplot particularly compelling. The story wasn’t very strong and there were too many characters with similar names who all seemed to be married to their cousins, which made it very difficult to keep all the relationships straight. I was constantly turning to the family tree at the front of the book and still couldn’t remember who was who. My advice to anyone reading The House on the Strand would be not to worry too much about following the 14th century story. By far the most interesting part of the book is the part which takes place in the present.

There were only one or two other negative points. First of all, I was disappointed that we didn’t get to know Magnus better, as I thought he was potentially the most interesting character in the book. Secondly, du Maurier made a point of describing the landscape and the locations of the various 14th century farmsteads and manor houses in great detail. I know this was supposed to show us how the appearance of the landscape had changed over the centuries (which is quite important to the plot), but I found it confusing and even by referring to the map at the front of the book, I couldn’t seem to build a picture in my mind of what the area looked like. Apart from these minor complaints though, I loved this book.

I’ve now read around half of du Maurier’s books. The good news is that I still have the other half to look forward to!