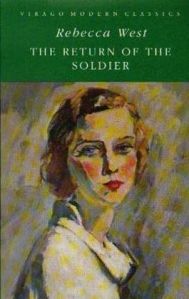 Rebecca West’s The Return of the Soldier was written during World War I and published in 1918. The soldier of the title is Christopher Baldry, who has just been sent home from a hospital in Boulogne. Chris is suffering from severe amnesia and is unable to remember the last fifteen years of his life. He can’t wait to be reunited with his girlfriend Margaret Allington, the daughter of an innkeeper on Monkey Island. Unfortunately, though, Margaret is no longer his girlfriend – she’s married to another man and is now Mrs Grey. And to make matters even more complicated, Chris has a wife of his own.

The story is narrated by Jenny, Chris’s cousin, who has been staying at his home, Baldry Court, with his wife, Kitty. Jenny is unmarried but appears to be in love with Chris herself and is devoted to making him happy. When it becomes obvious that Chris really can’t remember Kitty and is still in love with Margaret, the three women are faced with a decision. Is it better for him to be ‘cured’ and regain his memory, even if it means bringing back the horrors of war – or should he be left as he is, blissfully unaware of what has happened during the last fifteen years?

Despite being a quick read at less than 200 pages, The Return of the Soldier raises some interesting issues and leaves the reader with a lot to think about. Although the title character is a First World War soldier, this is not really a book about the war itself and we learn almost nothing about what Chris experienced (in fact, I felt that we didn’t really get to know Chris very well at all). Instead, West takes the war as a starting point to explore some of the consequences that arose from it, such as memory loss as a symptom of the shell shock which many soldiers suffered due to their horrific experiences in the trenches.

But to me, the major theme of this novel was West’s portrayal of class differences, with the rich, spoilt Kitty on one side and the poor, plain Margaret on the other. Kitty treats Margaret with disdain and contempt and Jenny initially shares the same views. I actually found the first couple of chapters quite difficult to read because of their nasty attitudes. For example, this is what Jenny thinks of Margaret on their first meeting:

She was repulsively furred with neglect and poverty, as even a good glove that has dropped down behind a bed in a hotel and has lain undisturbed for a day or two is repulsive when the chambermaid retrieves it from the dust and fluff.

Eventually Jenny’s attitude starts to change and she begins to see why Chris loves Margaret so much. However, Kitty’s character is never really developed at all. I was expecting Kitty and her relationship with Chris to play a bigger part in the story, but this didn’t happen. Instead, as Margaret comes into the forefront of the story and we start to see her inner beauty and warmth, Kitty’s role becomes less significant.

This book can easily be read in one sitting, which is exactly what I did as I didn’t want to put it down. Rebecca West’s writing is beautiful and for such a short book it was very moving and poignant. Just a word of warning, though – don’t read the back cover first as it gives the ending away!

I read this book as part of the Virago Reading Week hosted by Carolyn of A Few of My Favourite Books and Rachel of Book Snob.

13 thoughts on “Virago Reading Week: The Return of the Soldier by Rebecca West”