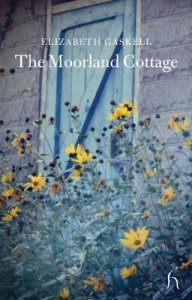 Having signed up for the Elizabeth Gaskell Reading Challenge I’m intending to read some of Gaskell’s full-length novels this year, but when I saw that Katherine of Gaskell Blog was hosting a group read of the novella, The Moorland Cottage, it seemed like a perfect way to start the challenge.

The Moorland Cottage is a short but very moving and emotional story. Mrs Browne and her children, Edward and Maggie, live with their elderly servant, Nancy, in a cottage near the town of Combehurst. It’s no secret that Edward is their mother’s favourite child but while she dotes on her son, she never has a kind word for her daughter. In a big house nearby live the wealthy Mr Buxton and his gentle, loving wife. There are also two children in the Buxton household: their son, Frank, and their niece, Erminia. The Buxtons attempt to befriend the Brownes, but while they can all see the goodness in Maggie, they find it difficult to like the spoilt, selfish Edward and the cold, snobbish Mrs Browne. As the years go by and the lives of the Brownes become more and more entwined with their neighbours’, Maggie is forced to make a decision which could potentially affect the future of both families.

The Moorland Cottage shows us the ways in which boys and girls were treated differently in Victorian society and I felt so sorry for Maggie. Throughout the first few chapters my heart was breaking for her as I saw how she was constantly pushed aside in favour of her brother. It was very, very sad to see the way, as a child, she meekly accepted her mother’s cruelty. For example, when Frank Buxton brings a pony for Maggie to ride, Mrs Browne decides “to spoil the enjoyment as far as possible, by looking and speaking in a cold manner, which often chilled Maggie’s little heart, and took all the zest out of the pleasure now”. How spiteful!

Maggie is also treated badly by Edward, and again, she allows him to do so, accepting that his needs are more important than her own. It’s not until she’s older and has spent more time in the company of the Buxtons and been exposed to other ideas that she starts to become aware of her brother’s faults. In the adult Edward, we see what happens to a child who is brought up always getting their own way and not being taught the difference between right and wrong.

I loved Gaskell’s descriptions of the Brownes’ home and the surrounding scenery throughout the changing seasons. Because the book was so short these descriptive passages had to be kept fairly brief which I thought made them even more effective.

The air on the heights was so still that nothing seemed to stir. Now and then a yellow leaf came floating down from the trees, detached from no outward violence, but only because its life had reached its full limit and then ceased. Looking down on the distant sheltered woods, they were gorgeous in orange and crimson, but their splendour was felt to be the sign of the decaying and dying year. Even without an inward sorrow, there was a grand solemnity in the season which impressed the mind, and hushed it into tranquil thought.

Finally, a few words on the group read itself: I thought this book was an excellent choice for a readalong. For such a short book it contains a wealth of interesting topics and issues. At only eleven chapters I could easily have read it in one day but I found that reading it slowly meant I had a better understanding of it and got more out of the story. And Katherine’s beautifully annotated chapter summaries were very useful and helped to bring the story to life. Visit Gaskell Blog to see them for yourself!

10 thoughts on “Group Read: The Moorland Cottage by Elizabeth Gaskell”