This year I am taking part in a Classics Challenge hosted by Katherine of November’s Autumn. The goal is to read at least seven classics in 2012 and every month Katherine is posting a prompt to help us discuss the books we are reading. Our task for June is to create a Visual Tour of a scene or description from the book.

The novel I’m currently reading for the challenge is Sylvia’s Lovers by Elizabeth Gaskell. The story is set in the 1790s in the fictional town of Monkshaven which Gaskell based on Whitby in North Yorkshire. Whitby was also the setting for Bram Stoker’s Dracula and is a beautiful coastal town with a busy harbour and a ruined abbey on the cliff. I would highly recommend a visit if you have the opportunity!

In Chapter 2 of the novel Sylvia and her friend Molly are walking into Monkshaven so that Sylvia can buy a new cloak. While they are there, a whaling ship returns from a voyage to the Greenland Sea. I have chosen some images that I think help to visualise Gaskell’s descriptions in this chapter.

..but as they were drawing near Monkshaven they stopped, and turned aside along a foot-path that led from the main-road down to the banks of the Dee. There were great stones in the river about here, round which the waters gathered and eddied and formed deep pools.

The next turn of the road showed them the red peaked roofs of the closely packed houses lying almost directly below the hill on which they were. The full autumn sun brought out the ruddy colour of the tiled gables, and deepened the shadows in the narrow streets.

The narrow harbour at the mouth of the river was crowded with small vessels of all descriptions, making an intricate forest of masts.

Image from Wikipedia – sepia photograph by Frank Sutcliffe, dated around 1890

There the old stone cross was raised by the monks long ago; now worn and mutilated, no one esteemed it as a holy symbol… 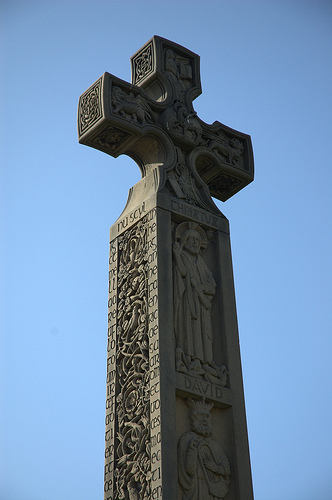 The fresh salt breeze was bringing up the lashing, leaping tide from the blue sea beyond the bar. Behind the returning girls there rocked the white-sailed ship, as if she were all alive with eagerness for her anchors to be heaved.

Image from Wikipedia – Whitby 1886, a watercolour on paper by Frederick William Booty

I hope these pictures have helped bring Gaskell’s writing to life for you! I’ll be posting my thoughts on Sylvia’s Lovers after I’ve finished reading the book.