Well, this week was a lot more stressful than I’d expected, unfortunately! I was driving home from work on Wednesday when I was hit from behind while waiting at traffic lights. Nobody was injured but the back of my car was quite badly damaged – and to make things even worse, it’s a new car that I’ve only had for a week! I couldn’t believe it! The other driver was entirely at fault and her insurance company have arranged for the repairs (which could take up to two weeks) and provided me with a courtesy car, but as you can probably imagine I didn’t have much time or enthusiasm for reading and blogging for a couple of days. 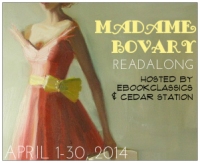 Things have settled down now, so I’m starting to catch up and am looking forward to telling you about some of my recent reads, including Eva Stachniak’s Empress of the Night, a novel about Catherine the Great, and Watch the Wall, My Darling by Jane Aiken Hodge, a great romantic suspense novel from the 1960s. I’m also taking part in a readalong of Madame Bovary by Gustave Flaubert this month, hosted by ebookclassics and Cedar Station. I have never read it before and have had a copy on my shelf for a while so this seemed like a good time to read it. I started it last night and have enjoyed what I’ve read so far.

I noticed on Friday that the shortlist for this year’s Walter Scott Prize for Historical Fiction has been announced. I always follow the progress of this prize with interest as historical fiction is my favourite genre. The books on the shortlist are:

The only one of these I have read is Life After Life, though Fair Helen sounds great and I’ll probably read The Luminaries eventually too. The winner will be announced in June.

How has your week been? I hope it’s been better than mine!