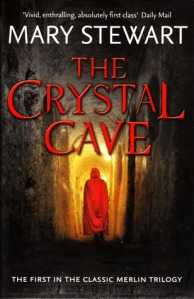 With only four of Mary Stewart’s suspense novels still to read, I decided that for Anbolyn’s Mary Stewart Reading Week I would try one of her Arthurian novels instead. The Crystal Cave is the first in the series and introduces us to Myrddin Emrys, better known as Merlin. I should begin by saying that I have previously read very few novels that tell the story of Merlin or King Arthur (T. H. White’s The Sword in the Stone is the only one that really comes to mind). I wasn’t sure that The Crystal Cave would be my type of book and I wondered if I would regret not picking up another of the romantic suspense novels for the reading week. Well, I can assure you that I didn’t regret my choice at all!

The book is set in 5th century Britain, a land of several warring kingdoms held together by Vortigern, the High King. Vortigern has invited the Saxons to Britain to help him rule, but they are disliked by the people and Vortigern’s throne is soon under threat not only from his own son, Vortimer, but also from two other princes – Ambrosius and Uther who are exiled in Less Britain (Britanny). This is the world into which Merlin is born.

Our story begins with six-year-old Merlin living in the home of his grandfather, the King of South Wales. Merlin’s mother is the King’s daughter, Niniane, but the identity of his father is unknown as Niniane has refused to reveal his name. Merlin is a lonely child, despised by his grandfather, but he is also very intelligent, quick to learn and has a special gift known as ‘the Sight’. One day he rides out into the hills near his home and discovers a cave inhabited by a man called Galapas. Inside this cave is a second, smaller cave filled with crystals in which Merlin has visions when he looks into the light of these crystals. When fate takes him across the Narrow Sea to Less Britain several years later, Merlin meets the exiled Ambrosius and makes some important discoveries about both the past and the future…

The Crystal Cave is a great book and is now one of my absolute favourites by Mary Stewart. It obviously has a different feel from her contemporary suspense novels, but there were also some similarities and I could definitely tell it was written by the same author! Whenever I read a Stewart novel I expect a strong setting with vivid descriptions and I certainly got that with this book. Merlin’s travels take him through England, Brittany and Ireland, to Tintagel Castle in Cornwall, to the wonders of Stonehenge and, of course, to Wales:

There were rain clouds massing in the west, but in front of them, like a bright curtain, the slanting sunlight. One could see on a day like this why the green hills of Wales had been called the Black Mountains and the valleys running through them the Valleys of Gold. Bars of sunlight lay along the trees of the golden valleys, and the hills stood slate-blue or black behind them, with their tops supporting the sky.

One thing that surprised me about this book is that it does not have such a strong fantasy element as I’d expected. While Merlin certainly does have visions which foretell the future, many of the things he does have very little to do with magic and more to do with his observations and understanding of science and of human nature. I loved the way his character was portrayed; he felt so believable and real. It probably helped that I don’t have a lot of previous knowledge of the myths and legends surrounding Merlin which meant I had no preconceived ideas and could just concentrate on enjoying Mary Stewart’s version of the story. I’m so pleased I chose The Crystal Cave for the Reading Week and am now looking forward to meeting Merlin again in The Hollow Hills!

20 thoughts on “The Crystal Cave by Mary Stewart”