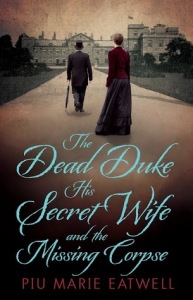 How could I resist reading a book with a title like that? Luckily, the story between the covers proved to be as intriguing as the title; I was completely engrossed in The Dead Duke, His Secret Wife and the Missing Corpse from beginning to end. I don’t often choose to read non-fiction but I’m very glad I decided to read this one!

In The Dead Duke, Piu Marie Eatwell gives a thoroughly researched account of one of the most bizarre legal cases of the Victorian and Edwardian eras. In 1897, Anna Maria Druce approached the courts to request the exhumation of her father-in-law’s grave. She sensationally claimed that her father-in-law, T.C. Druce, was actually the 5th Duke of Portland and had been leading a double life until deciding to kill off his alter ego. Druce had faked his own death, she said, and if his coffin was opened it would be found to be empty. This would leave Anna Maria’s son as the true heir to the Portland fortune.

This was only the beginning of a fascinating legal battle that would continue for years, attracting a huge amount of media attention and capturing the imaginations of the public. Of course, I’m not going to spoil any of the book’s surprises by telling you whether the grave was ever opened or whether Anna Maria’s claims were proved to be true, but along the way some shocking revelations were made and some dark secrets were uncovered!

With tales of secret wives and illegitimate children, fraud and forgery, stolen evidence and unreliable witnesses, lies and deception and double identities, this could have been the storyline of a Wilkie Collins or Mary Elizabeth Braddon novel (and Eatwell does draw some parallels with the lives and works of these authors and others). As a fan of Victorian sensation novels, it’s not surprising that I enjoyed this book so much.

I particularly loved reading about the eccentric lifestyle of the 5th Duke of Portland. Becoming increasingly reclusive in his later years, he rarely went out in daylight and constructed a labyrinth of underground tunnels beneath his estate. He often wore six coats at the same time, had a large collection of wigs and only ate in the mornings and evenings. His alleged alter ego, T.C. Druce, who ran a London department store, was said to have some similar habits, which added some support to the theory that the two men were one and the same.

I was impressed with the huge amount of research the author must have carried out while she was writing this book, drawing on newspaper articles, letters, photographs, census records and other documents to build up a full and balanced picture of the case. Every time a new character is introduced we are given details of their family history, personal background, appearance and personality, all of which helps to bring them to life rather than being just names on the page. Further notes are provided at the back of the book, along with a list of primary and secondary sources.

Thanks to Midas PR for providing a review copy of this book.

14 thoughts on “The Dead Duke, His Secret Wife and the Missing Corpse by Piu Marie Eatwell”