For my second monthly post on history and historical fiction (see last month’s here) I’m going to focus on a topic I know very little about: Ancient Rome. Despite living close to Hadrian’s Wall, I’ve never been particularly interested in Roman history and have only ever explored one or two of the many sites along the wall, but last weekend I decided to take advantage of my English Heritage membership and visit Corbridge Roman Town.

The granary at Corbridge Roman Town

Hadrian’s Wall was built in AD122-30 during the reign of the Emperor Hadrian and stretches for 73 miles across the north of England. It does not separate England from Scotland, as many people believe! Corbridge, in Northumberland, was the site of a busy Roman town and supply base and the remains of the streets and buildings can still be seen today. As well as walking around the ruins, there’s also a museum where you can see a display of some of the items excavated from the site, including the Corbridge Hoard (a collection of Roman weapons and armour found buried in a chest) and the Corbridge Lion (a large stone statue which was originally an ornament from a tomb). 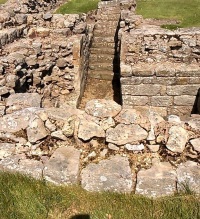 Steps leading to the ‘Strongroom’

This brief sojourn into Roman history made me wonder why it is that I so rarely choose to read books about the Romans. It’s just not a time period I’ve ever felt drawn to, though I’m not sure why that should be. A quick search for posts using the ‘Ancient Rome’ tag on my blog brings up only two novels set in Rome that I’ve read in the last few years – Colossus: The Four Emperors by David Blixt and Cleopatra’s Daughter by Michelle Moran – and I’m having trouble thinking of any others that I may have read before I started blogging. I would love some recommendations!

I already have copies of The Eagle of the Ninth by Rosemary Sutcliff and I, Claudius by Robert Graves. Do you think I would like either of these or is there something else you would recommend? Fiction or non-fiction, books set in Rome itself or in other parts of the Roman Empire – all suggestions are welcome!

What are your favourites?