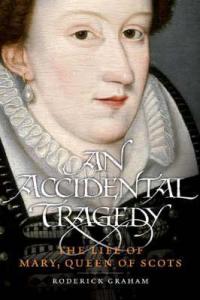 The death of Mary, Queen of Scots, executed in 1587, could certainly be considered a tragedy. Was it also an accidental one? Could Mary’s fate have been avoided if she had only been a different type of person and if she had made different choices in life? This is the starting point for Roderick Graham’s 2009 biography of one of Scotland’s most fascinating monarchs, which claims ‘neither to blacken her character by portraying her as a murderess of husbands, nor to sanctify her as the lonely champion of her faith, but to recount the circumstances which formed her character and to explain the events which determined her fate’.

The book begins with Mary’s birth at Linlithgow Palace in 1542 and her rapid accession to the throne when her father, James V of Scotland, died just six days later. Mary was not Scotland’s first child monarch – James V himself and all of the four kings before him also came to the throne at an early age – and the Scottish people had become used to long periods of regency. As Graham explains, this led to an increase in the power and independence of the nobility and caused division and a lack of unity.

After a marriage treaty between Mary and Henry VIII’s son, Prince Edward, was rejected by the Scots, the five-year-old queen was sent to France where she would eventually marry the French king’s heir, the Dauphin Francis. Mary grew up in France rather than Scotland and she and Francis were strongly influenced by her mother’s relatives, the Guises. This meant that when Mary returned to Scotland to rule in 1561 following her husband’s death, she had very little knowledge of the country of her birth. At a time of increasing religious and political conflict among the Scottish noblemen a strong leader was needed.

Roderick Graham does a good job of showing how poorly equipped Mary was for her role as Queen of Scots and how she was unable to provide the sort of leadership the country required. Despite the presence of three influential women in her life – her mother, Mary of Guise; the Queen of France, Catherine de’ Medici; and the King of France’s mistress, Diane de Poitiers – Mary appeared to learn very little from any of them regarding the management of court intrigue and politics. The years that followed her return to Scotland were dominated by murders, plots, rebellions and two disastrous marriages, the first to Lord Darnley and the second to the Earl of Bothwell, finally ending in her abdication and imprisonment in England.

I found it interesting that Graham had chosen to write a book about someone for whom he seemed to have so little admiration, sympathy or liking. He never misses an opportunity to compare Mary with that other queen south of the border – Elizabeth I – and to point out how much stronger, cleverer and wittier the Queen of England was. In contrast, he paints a picture of Mary as immature, incapable of making good decisions and driven by passion and emotion. I’m not sure how fair or unfair his treatment of Mary is, but despite his preference for Elizabeth, he still made me feel sad for Mary as her life drew closer to its tragic end.

An Accidental Tragedy is the first book I’ve read that is specifically about Mary, Queen of Scots. Of course, I’ve come across her in other non-fiction books about the Tudor/Elizabethan period and she has been a secondary character in some of the historical fiction novels I’ve read, but this is the first time I’ve read a comprehensive biography of her entire life. I was particularly interested in reading about this period in Scotland’s history because my favourite historical fiction series, the Lymond Chronicles by Dorothy Dunnett, is set during the first part of Mary’s reign, but this just added another layer of interest to what was already a fascinating and very readable biography.

If anyone has any other biographies of Mary to recommend, please let me know. I would love to read another one.

12 thoughts on “An Accidental Tragedy: The Life Of Mary, Queen Of Scots by Roderick Graham”