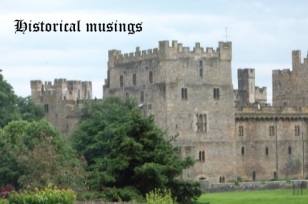 One of my current reads is Rebellion by Livi Michael, the second in a trilogy of novels set during the Wars of the Roses. A few chapters in, I came across the sentence “My Lord of Warwick lies at the castle of Warkworth and he rides daily to all these castles to oversee the sieges”. With my interest in history, you won’t be surprised to hear that I enjoy visiting castles! Warkworth Castle is one of my ‘local’ castles (less than an hour’s drive away) and I have visited it more than once, the first time as a ten-year-old on a school trip. As someone who reads a lot of historical fiction, castles feature regularly in my reading but I haven’t been to most of them so it’s always nice to see a mention of one that I am familiar with. 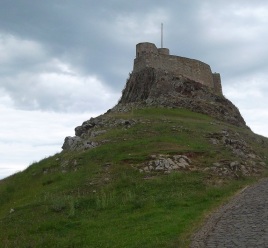 Like Warkworth Castle, most of the other castles I have visited are in Northumberland. Bamburgh Castle is surely the most dramatic; as you drive along the coast, you just seem to turn a corner and there it is, almost on top of you. Lindisfarne Castle is atmospheric too, due to its location perched on a hill on Holy Island. Then there’s Chillingham Castle, famous for its ghosts, and Alnwick Castle, still the home of the Dukes of Northumberland and better known to Harry Potter fans as Hogwarts. I’ve also been to Belsay Castle (for an English Heritage ‘Knights Tournament’) and to Newcastle Castle – yes, there’s a castle in Newcastle upon Tyne! 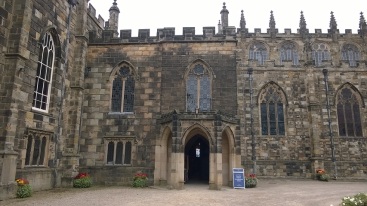 In Cumbria, I enjoyed visiting Carlisle Castle (being close to the border with Scotland it has apparently been under siege more times than any other castle in England) and Muncaster Castle in remote Ravenglass, of which my abiding memory is not so much the castle itself as the Hawk and Owl Centre and the birds of prey display in the castle grounds. In County Durham, among others, there’s Auckland Castle, which was the seat of the Bishops of Durham. I can also highly recommend Raby Castle, with its coach house, deer park and walled gardens (this is the castle I have used in my ‘Historical Musings’ image which is displayed at the top of this post).

I’ve been to Edinburgh Castle and have seen Cardiff Castle from the outside, but I sadly haven’t managed to visit any of the other castles in Scotland and Wales yet, which is something I would like to change. I’m hoping someone can tell me which ones I should put at the top of my list! There are still many, many more castles for me to see in England too, as apart from Leeds Castle in Kent and the Tower of London, most of my castle-visiting so far has been restricted to the north. And of course, there are castles all over Europe and beyond just waiting to be explored as well. 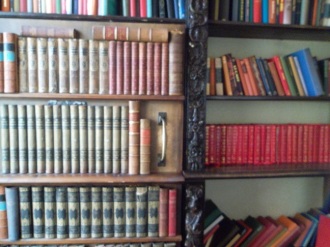 A few years ago I had the opportunity to stay for two nights at Hazlewood Castle in North Yorkshire, which is now a hotel but also has an interesting history and overlooks the site of the Battle of Towton. The bedrooms are accessed through a secret passage behind a bookcase in the library (you can see the door handle in my picture).

Visiting a castle today, as a twenty-first century tourist, it can be difficult to imagine what it would have been like to actually live or work in the castle when it was newly built. Apart from the castles like Alnwick which are still inhabited, and the ones which have been kept largely intact and furnished by private owners, many of the others have fallen into ruin and are now not much more than empty shells. Historical fiction can breathe new life into these ancient buildings and help us to picture what they were like when they were still in use.

At the beginning of Diana Gabaldon’s Outlander series, her time-travelling nurse, Claire Randall, sees a ruined castle restored to its former glory:

Castle Leoch. Well, at least now I knew where I was. When I had known it, Castle Leoch was a picturesque ruin. It was considerably more picturesque now, what with the sheep huddling under the walls of the keep and the pervasive smell of raw sewage. I was beginning to accept the impossible idea that I was, most likely, somewhere in the eighteenth century.

Leoch is a fictional castle, but there are plenty of real castles which appear in historical fiction. I have already said that Warkworth Castle is mentioned in Rebellion (and so are lots of other castles), while Raby Castle was referred to in Red Rose, White Rose by Joanna Hickson, a novel about Cicely Neville, mother of Edward IV and Richard III, known as the Rose of Raby:

Dominating the upper reaches of this fertile basin was Raby Castle, the ancestral home of the Neville family – my family. Renowned as one of England’s great northern fortresses, Raby’s nine massive towers sprawled below me like the giants of legend; they loomed over the meagre mud-plastered cotts of the village beyond its moat. I had lived most of my seventeen years within those soaring walls. To my mother it was a palace, a great haven of security and splendour demonstrating infallibly the enormous wealth and power of the Nevilles, but to me it had become a prison. 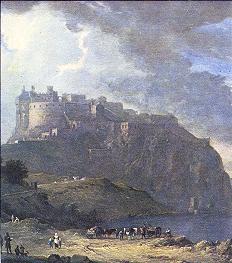 Edinburgh Castle with the Nor’ Loch in the foreground

In The Game of Kings, Dorothy Dunnett brings Edinburgh Castle to life in one perfect sentence:

Tonight the Castle on its pinnacle was fully lit, laying constellations on the water.

Moving away from castles I have actually visited, there are far too many other examples of castles in historical fiction to list here. Castles always feature strongly in the medieval novels of Sharon Penman and Elizabeth Chadwick, for example: I remember there were some great scenes involving trebuchets in Chadwick’s To Defy a King. Mary of Carisbrooke by Margaret Campbell Barnes is the story of Charles I’s imprisonment in Carisbrooke Castle on the Isle of Wight, and in Robyn Young’s Robert the Bruce trilogy, castles are constantly being attacked or besieged. As I’ve said, there are so many castles mentioned in historical novels that I would be here forever if I wanted to talk about all of them!

My questions this month, then, are:

Have you visited any castles? Which ones? If not, would you like to? Which books have you enjoyed that are set in castles or with memorable scenes involving castles?

I have concentrated on British castles here because they are the ones I know most about, but I would love to hear about castles in other countries too!

*All pictures used in this post are my own, apart from the painting of Edinburgh Castle which is in the public domain.