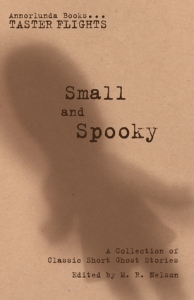 As it’s Halloween on Monday, I thought today would be a good time to tell you about the wonderful collection of classic ghost stories I’ve just had the pleasure of reading. It’s called Small and Spooky and the six stories it contains were selected by M.R. Nelson, editor of two other short story collections (she refers to them as ‘taster flights’), one of which – Love and Other Happy Endings – I read and enjoyed earlier in the year.

Three of the stories in this collection are by authors I already know and love, while the other three are by authors who were new to me. All six share a common theme – they all feature a child or the ghost of a child – but otherwise they’re all quite different. It’s difficult to know how much you can say about short stories without spoiling them, so I’m just going to give a brief overview of each one.

The first is The Marble Child (1918) by E. Nesbit, a favourite childhood author of mine. I remember loving her children’s novels The Railway Children and The Phoenix and the Carpet, but had no idea until recently that she had also written ghost stories. This story about a little boy who is fascinated by the marble child he sees in the church gets the collection off to a good start. Part of the story is written from the boy’s perspective and part from an adult’s which, as the editor points out in her notes, makes this story a sort of bridge between children’s and adult fiction.

The next story is a great one: The Wind in the Rose-Bush (1903) by Mary E. Wilkins Freeman, an American author I had never heard of until now. The story follows Rebecca Flint as she travels to a small, remote town hoping to see her young niece, who has been living with her stepmother since her parents died. From the moment Rebecca arrives and sees a rosebush moving when there’s no wind, she knows something is wrong. I found it easy to guess what was going on in this story, but Rebecca didn’t know and I could really feel her growing sense of unease and confusion as the truth began to unfold.

Next is Their Dear Little Ghost (1890) by Elia Wilkinson Peattie (also another new author for me), which as you might guess from the title is not a scary ghost story at all. It’s actually quite a sweet and moving little story about a child who dies just before Christmas and her godmother’s love for her even in death. I found this one of the weakest stories in the book, but I still liked it and thought it made a nice contrast to the previous one, which was quite creepy!

The following story, Morella (1835), is by Edgar Allan Poe. Poe is another author I love and I was already familiar with Morella (I think I read nearly all of his short stories and poems years ago when I was given his complete works as a Christmas present). This tale of reincarnation is not one of his scariest and I don’t think it’s one of his best either, but I can see why it was chosen for this collection as it does fit the theme.

The fifth story is another strong one: The Old Nurse’s Story (1852) by Elizabeth Gaskell. I was convinced I had read this one before – it appears in Gaskell’s Gothic Tales which I borrowed from the library a few years ago – but when I started to read, I didn’t remember it at all. In this atmospheric story set in winter, a ghostly child haunts the Northumberland countryside. I love Gaskell’s writing and this is an excellent example of a Victorian ghost story.

Finally, we have The Doll’s Ghost (1911) by F. Marion Crawford, another author I’ve never read before. This is an unusual story about a child’s doll which is broken and given to a dolls’ hospital to repair. Although I found this story a bit eerie, the ghost was a nice ghost, which meant the collection finished on an uplifting note! I would be happy to read more by this author.

These are six very enjoyable stories and perfect for those readers who, like me, prefer their ghost stories to be spooky but not terrifying! It was good to revisit Nesbit, Gaskell and Poe – and also to be introduced to three new authors, all of whom I’m now interested in exploring further.

Thanks to M.R. Nelson for providing a copy of Small and Spooky for review.

10 thoughts on “Small and Spooky, edited by M.R. Nelson”