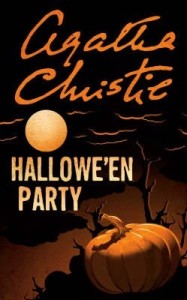 With this year’s R.I.P. Challenge rapidly coming to a close, I decided to squeeze an Agatha Christie novel in before the end of the month. Hallowe’en Party was one I hadn’t read before so I thought it would be a good choice for a late October read. As one of the final Poirot novels, published in 1969 towards the end of Christie’s career, I wasn’t expecting it to be one of her better books – and I don’t think it was – but I did still enjoy reading it.

At the beginning of the book, Mrs Drake is hosting a Halloween party for a group of teenagers. One of them, thirteen-year-old Joyce, who likes to be the centre of attention, tries to impress the others by insisting that she had once been a witness to a murder. Knowing Joyce’s reputation for telling lies, nobody believes her…but at the end of the party, she is found dead, drowned in the bucket of water which had been used for the traditional Halloween game of bobbing for apples. It seemed that somebody may have believed Joyce after all and has murdered her before she can say any more.

Among the adults helping out at the party is the crime novelist, Ariadne Oliver, who summons her old friend, Hercule Poirot, to the village, sure that he will be able to identify Joyce’s killer. But when Poirot arrives he quickly discovers that before he can begin to solve the mystery of Joyce’s death, there’s another murder to investigate first: the one which Joyce claimed to have witnessed and which someone was so desperate to cover up that they were prepared to kill again.

As I said, I found this an enjoyable Poirot novel but not a great one. The solution to the mystery didn’t seem as complex or original as some of the others and I found some of the characters hard to distinguish from each other. Having said that, I did guess who had committed the murders before the truth was revealed – although I have to confess my guess was just based on gut instinct and not because I’m a better detective than Poirot. There are some other surprises towards the end as well, although one particular revelation felt too far-fetched – it seemed to come out of nowhere with no real reason for it.

I enjoyed reading about the preparations for the party and the games that were played at it, but I was slightly disappointed that the Halloween theme didn’t continue after the first few chapters. The rest of the book could have been set at any time of the year, really. It’s still quite an atmospheric book, though; I particularly loved the descriptions of the ‘sunk garden’ in the quarry where some of the later scenes take place.

There’s not much more I can say about this book. It’s a good entry in the series, although not my favourite, and if you’re already a Poirot fan I’m sure you’ll find a lot to like – especially if you’ve read some of the earlier books featuring Ariadne Oliver. If you’re new to Poirot, I would probably recommend choosing a different one to start with.