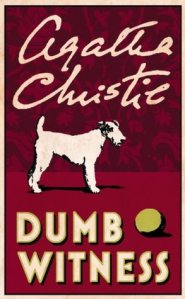 Dumb Witness (also published in the US as Poirot Loses a Client) was May’s selection for the Agatha Christie Reading Challenge I’ve been taking part in this year. I missed last month’s because the chosen book – The Murder of Roger Ackroyd – was one I’d read before and wasn’t ready to read again – but this one was new to me and sounded very appealing.

Published in 1937, Dumb Witness is one of several Christie novels which feature her famous detective Hercule Poirot and are narrated by his friend Captain Hastings. The novel opens with the family of old Emily Arundell gathering to celebrate the Easter weekend at her home, Littlegreen House, in the fictional village of Market Basing. Emily’s dog, Bob, is excited because there are more people to play his favourite game with him – bouncing his ball from the top of the stairs to the bottom. When Emily gets up during the night and falls down the stairs, however, it’s poor Bob who gets the blame. He must have left his ball there and his mistress didn’t see it in the dark; what other explanation could there be? And yet…

Surely — surely, she must be mistaken…One often had queer fancies after an event had happened. She tried — earnestly she tried — to recall the slippery roundness of Bob’s ball under her foot…
But she could recall nothing of the kind.
Instead —

Convinced that her fall was not an accident and not Bob’s fault, Emily writes to Hercule Poirot and hints that she would like him to investigate the ‘incident of the dog’s ball’, but by the time he receives the letter it’s too late. Emily Arundell is dead, presumably of natural causes. Studying the letter she sent him, Poirot is sure that it wasn’t a natural death at all so, with Hastings by his side, he sets off for Littlegreen House to prove that Miss Arundell has been murdered.

There is certainly no shortage of suspects. Her nieces and nephew and their partners are all in need of money for various reasons and could all have had an opportunity to carry out the murder, while the person who does actually benefit financially from her death – her companion, Miss Lawson – also has to be considered. Then there are the other servants at Littlegreen House, as well as two spiritualist women who claim to have seen a halo of light around Emily Arundell’s head. With her usual skill, Christie directs our suspicions first at one character, then at another, and although I kept thinking I had identified the culprit, I didn’t manage to guess the correct solution until just before it was revealed. However, I did still pick up on one or two important clues before Poirot did, so I don’t need to feel too ashamed!

I really enjoyed this particular Poirot novel; I usually do tend to enjoy the ones narrated by Hastings and I wish there had been a few more of them. The real star of this book, though, has to be Bob the dog! Although he is presumably the ‘dumb witness’ of the title, Christie gives him a personality of his own – and even some dialogue, of a sort. It’s little touches like this that made this book so entertaining. Now I’m wondering what the June choice for the challenge will be.