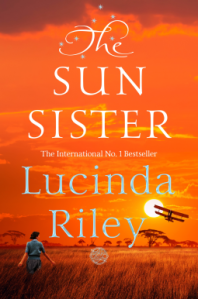 This is the sixth book in Lucinda Riley’s Seven Sisters series inspired by the mythology of the star cluster known as the Pleiades or ‘the seven sisters’. Each novel tells the story of one of the adopted daughters of a mysterious billionaire known as Pa Salt who dies at the beginning of the series, leaving each sister some clues to help them trace their biological parents.

The girls all grew up together at Atlantis, Pa Salt’s estate by Lake Geneva in Switzerland, but they were born in different countries and came from a diverse range of cultures and backgrounds. They are each named after one of the stars in the cluster – Maia, Alycone (Ally), Asterope (Star), Celaeno (CeCe), Taygete (Tiggy) and Electra. There should have been a seventh sister, whose name would have been Merope, but for some reason which hasn’t yet been revealed, only six girls were actually brought home to Atlantis by Pa Salt.

In the previous books in the series, we have heard Maia’s story, Ally’s, Star’s, CeCe’s and Tiggy’s. This latest novel, The Sun Sister, tells the story of Electra, and I will admit that I was not particularly looking forward to this one. Whenever Electra briefly appeared in one of the other sisters’ books, she came across as a very unattractive personality and I wasn’t really relishing the thought of following her throughout an entire novel. On the other hand, I had initially felt the same about CeCe and ended up liking her once I had read The Pearl Sister, so I hoped the same would happen here.

At the beginning of The Sun Sister, which opens in 2008, shortly after Pa Salt’s death, Electra is living in New York City, where she has built a successful career for herself as a model. Yet despite her beauty, fame and wealth, we quickly discover that Electra is not a very happy young woman. For a while now, she has been relying on drugs and alcohol to get through the day and the loss of her adoptive father, whom she feels was disappointed in her, has left her struggling to cope. To make things worse, she is aware that all five of her older sisters have by now traced their own origins and come to terms with who they really are. Then, just as she is reaching her absolute lowest ebb, she is visited by Stella Jackson, the grandmother she didn’t know she had – and the story Stella tells her will literally help to save her life.

Stella’s story involves another of Electra’s ancestors – Cecily Huntley-Morgan, a young American woman who, in the 1930s, goes to stay with her godmother in Kenya after having her heart broken not once but twice. Living amongst the notorious Happy Valley set, by the shores of Lake Naivasha, Cecily falls in love with the landscape and the way of life. She ends up staying in Kenya for much longer than she had planned, until she meets a troubled Maasai girl and agrees to help her – a decision that will change the course of Cecily’s life once again.

The two storylines alternate with each other throughout the book, but each section is long enough that we can become fully immersed in one character’s story before moving on to the next. Of the two, Cecily’s was my favourite; in fact, it might even be my favourite of all the historical storylines in this series so far. I loved the descriptions of Kenya and the way some of the real incidents and people from the Happy Valley society were woven into the story. Although I didn’t agree with all of Cecily’s decisions (and I was disappointed in her treatment of a certain person in her life towards the end of the book), I did like her and sympathised with some of the situations she found herself in.

But I also enjoyed reading about Electra and despite my dislike of her at the beginning, I soon began to warm to her and to understand why she behaved the way she did. It was clear that Electra had always felt slightly out of place in her family, so it was good to see her bonding with her eldest sister, Maia, in this book. Now I hope she can resolve her differences with CeCe in the final book!

After not really looking forward to this book, it turned out to be one of the best in the series. Now I’m very curious about the seventh one, which is going to have to provide answers to all of the questions and mysteries raised in the previous six. I hope we don’t have to wait too long for it.

6 thoughts on “The Sun Sister by Lucinda Riley”