Following the announcement of the 2021 longlist for the Walter Scott Prize for Historical Fiction in February, the shortlist has been revealed today. As you may know, I am slowly working my way through all of the shortlisted titles for this prize since it began in 2010 (you can see my progress here), so I will be trying to read all of the books below eventually. There are five books on this year’s list and here they are: 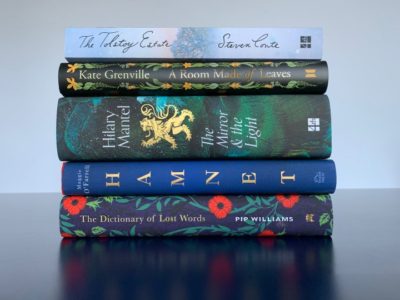 The Tolstoy Estate by Steven Conte

“In the first year of the doomed German invasion of Russia in WWII, a German military doctor, Paul Bauer, is assigned to establish a field hospital at Yasnaya Polyana – the former grand estate of Count Leo Tolstoy, the author of the classic War and Peace. There he encounters a hostile aristocratic Russian woman, Katerina Trubetzkaya, a writer who has been left in charge of the estate. But even as a tentative friendship develops between them, Bauer’s hostile and arrogant commanding officer, Julius Metz, becomes erratic and unhinged as the war turns against the Germans. Over the course of six weeks, in the terrible winter of 1941, everything starts to unravel…

From the critically acclaimed and award-winning author, Steven Conte, The Tolstoy Estate is ambitious, accomplished and astonishingly good: an engrossing, intense and compelling exploration of the horror and brutality of conflict, and the moral, emotional, physical and intellectual limits that people reach in war time. It is also a poignant, bittersweet love story – and, most movingly, a novel that explores the notion that literature can still be a potent force for good in our world.”

A Room Made of Leaves by Kate Grenville

“It is 1788. Twenty-one-year-old Elizabeth is hungry for life but, as the ward of a Devon clergyman, knows she has few prospects. When proud, scarred soldier John Macarthur promises her the earth one midsummer’s night, she believes him.

But Elizabeth soon realises she has made a terrible mistake. Her new husband is reckless, tormented, driven by some dark rage at the world. He tells her he is to take up a position as Lieutenant in a New South Wales penal colony and she has no choice but to go. Sailing for six months to the far side of the globe with a child growing inside her, she arrives to find Sydney Town a brutal, dusty, hungry place of makeshift shelters, failing crops, scheming and rumours.

All her life she has learned to be obliging, to fold herself up small. Now, in the vast landscapes of an unknown continent, Elizabeth has to discover a strength she never imagined, and passions she could never express.

Inspired by the real life of a remarkable woman, this is an extraordinarily rich, beautifully wrought novel of resilience, courage and the mystery of human desire.”

The Mirror and the Light by Hilary Mantel

“England, May 1536. Anne Boleyn is dead, decapitated in the space of a heartbeat by a hired French executioner. As her remains are bundled into oblivion, Thomas Cromwell breakfasts with the victors. The blacksmith’s son from Putney emerges from the spring’s bloodbath to continue his climb to power and wealth, while his formidable master, Henry VIII, settles to short-lived happiness with his third queen, Jane Seymour.

Cromwell is a man with only his wits to rely on; he has no great family to back him, no private army. Despite rebellion at home, traitors plotting abroad and the threat of invasion testing Henry’s regime to breaking point, Cromwell’s robust imagination sees a new country in the mirror of the future. But can a nation, or a person, shed the past like a skin? Do the dead continually unbury themselves? What will you do, the Spanish ambassador asks Cromwell, when the king turns on you, as sooner or later he turns on everyone close to him?

With The Mirror and the Light, Hilary Mantel brings to a triumphant close the trilogy she began with Wolf Hall and Bring Up the Bodies. She traces the final years of Thomas Cromwell, the boy from nowhere who climbs to the heights of power, offering a defining portrait of predator and prey, of a ferocious contest between present and past, between royal will and a common man’s vision: of a modern nation making itself through conflict, passion and courage.”

“On a summer’s day in 1596, a young girl in Stratford-upon-Avon takes to her bed with a fever. Her twin brother, Hamnet, searches everywhere for help. Why is nobody at home?

Their mother, Agnes, is over a mile away, in the garden where she grows medicinal herbs. Their father is working in London. Neither parent knows that one of the children will not survive the week.

Hamnet is a novel inspired by the son of a famous playwright. It is a story of the bond between twins, and of a marriage pushed to the brink by grief. It is also the story of a kestrel and its mistress; flea that boards a ship in Alexandria; and a glovemaker’s son who flouts convention in pursuit of the woman he loves. Above all, it is a tender and unforgettable reimagining of a boy whose life has been all but forgotten, but whose name was given to one of the most celebrated plays ever written.”

The Dictionary of Lost Words by Pip Williams

“Esme is born into a world of words. Motherless and irrepressibly curious, she spends her childhood in the ‘Scriptorium’, a garden shed in Oxford where her father and a team of dedicated lexicographers are collecting words for the very first Oxford English Dictionary. Esme’s place is beneath the sorting table, unseen and unheard. One day a slip of paper containing the word ‘bondmaid’ flutters to the floor. Esme rescues the slip and stashes it in an old wooden case that belongs to her friend, Lizzie, a young servant in the big house. Esme begins to collect other words from the Scriptorium that are misplaced, discarded or have been neglected by the dictionary men. They help her make sense of the world.

Over time, Esme realises that some words are considered more important than others, and that words and meanings relating to women’s experiences often go unrecorded. While she dedicates her life to the Oxford English Dictionary, secretly, she begins to collect words for another dictionary: The Dictionary of Lost Words.

Set when the women’s suffrage movement was at its height and the Great War loomed, The Dictionary of Lost Words reveals a lost narrative, hidden between the lines of a history written by men. It’s a delightful, lyrical and deeply thought-provoking celebration of words, and the power of language to shape the world and our experience of it.”

The only one of these I’ve read so far is Hamnet and although I wasn’t a fan, I’m aware that most people have loved it so I won’t be at all surprised if it wins. I’m sure The Mirror and the Light will be another strong contender; I haven’t finished it yet, but will eventually! Of the remaining three books, The Dictionary of Lost Words doesn’t appeal to me much but I’m looking forward to reading the other two (although The Tolstoy Estate hasn’t been published here in the UK yet).