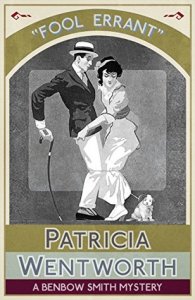 This week Karen and Simon are hosting 1929 Club, the latest of their biannual events where we all read and write about books published in the same year. 1929 turns out to have been a particularly great year for publishing, with lots of tempting titles to choose from, but I decided to start with a book by an author I had never read but had been intending to try for a long time.

Patricia Wentworth is better known for her Miss Silver mystery series, but Fool Errant is the first of four novels featuring a different crime-solving character – Benbow Collingwood Horatio Smith. Named after three famous British admirals, the mysterious Mr Smith lives in London with his very talkative parrot, Ananias, and carries out some sort of espionage work for the Foreign Office. We learn little more than that about him in this book – in fact, he only makes two or three brief appearances and remains an eccentric, shadowy character in the background.

The novel opens with a nervous, stammering young man, Hugo Ross, arriving at Meade House, the home of the inventor Ambrose Minstrel. He is hoping to apply for the position of secretary and is surprised when Minstrel immediately offers him the job despite his lack of qualifications and experience. Before he even starts work, however, he has an encounter with a young woman in the street who is running away from home to avoid marriage with a distant cousin. When she hears that Hugo is planning to join Minstrel’s household, she is horrified and advises him to leave at once, but rushes off to catch her train before Hugo can ask for an explanation.

Taking up his new position as Minstrel’s secretary, Hugo soon begins to feel that something is not quite right at Meade House. Following a series of strange occurrences – and another warning from the young woman, whose name he discovers to be Loveday Leigh – Hugo decides to consult his brother-in-law’s uncle, Benbow Smith. It seems that he has stumbled upon a plot that could have serious implications for the government – and for his own safety if Minstrel finds out that he has guessed the truth. With the help of Smith and Loveday, Hugo must try to foil the plot while convincing Minstrel and his accomplices that he really is the timid, gullible idiot they believe him to be.

Fool Errant turned out to be a good choice for my first Patricia Wentworth novel; I expect it’s quite different from the Miss Silver books, being much more of a thriller than a mystery, but it was fun to read and the exciting plot kept me turning the pages. My only real problem was with the ridiculous characterisation of Loveday Leigh who, although she saves the day on one or two occasions, behaves like a child, is unable to have a serious conversation and expects kisses at the most inappropriate moments. Women like Loveday are quite common in books from that era, of course, but she has to be one of the worst I’ve come across!

This probably isn’t a book I’ll want to read again, but I did enjoy it and will look forward to reading the other three Benbow Smith novels…eventually!

Other 1929 books previously reviewed on my blog:

A Room of One’s Own by Virginia Woolf

A Farewell to Arms by Ernest Hemingway

Partners in Crime by Agatha Christie