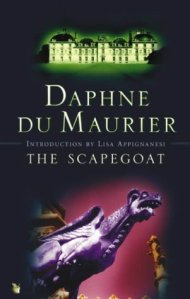 What would you do if you came face to face with yourself? That’s what happens to John, an Englishman on holiday in France, when he meets his exact double – a Frenchman called Jean de Gue.  John agrees to go for a drink with Jean but falls into a drunken stupor and wakes up in a hotel room to find that Jean has disappeared, taking John’s clothes and identity documents with him!

When Jean’s chauffeur arrives at the hotel, John is unable to convince him of what has happened – and ends up accompanying the chauffeur to Jean de Gue’s chateau, where the Frenchman’s unsuspecting family assume that he really is Jean de Gue.  Naturally, they expect him to continue running the family glass-making business and arranging shooting parties – things that John has absolutely no experience in.  Before long, it starts to become obvious that Jean is using John as a scapegoat; Jean’s family and business are both in a mess and he wants someone else to have to deal with them.

Throughout the book, I was forced to revise my opinions once or twice about what was really going on. If everything in the book is supposed to be taken literally, then we need to suspend belief at times: could two men really be so identical that even their mother, wife and daughter can’t tell the difference? There is also another way to interpret the story, one which goes deeper into the psychology of identity – I won’t say any more about that here, but if you have read the book this theory may have occurred to you too.

As usual, du Maurier’s writing is wonderfully atmospheric. She has a way of making you feel as though you’re actually there in the hotel room in Le Mans, the grounds of Jean de Gue’s estate in the French countryside and Bela’s antique shop in the town of Villars.

When John first arrives at the de Gue chateau, every member of the household is a stranger to him but we (and John) are given enough clues to gradually figure out who each person is and what their relationship is to Jean de Gue.  From the neglected pregnant wife and the hostile elder sister to the resentful younger brother and the religious ten-year-old daughter, every character is well-drawn and memorable.

Another thing I love about Daphne du Maurier’s writing is her ability to always keep the reader guessing right to the final page (and sometimes afterwards too).  This was a fascinating and unusual story, one of my favourite du Maurier books so far.

7 thoughts on “Review: The Scapegoat by Daphne du Maurier”