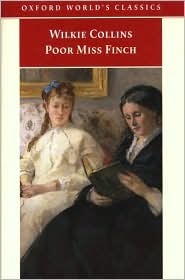 You are here invited to read the story of an Event which occurred in an out-of-the-way corner of England, some years since.
The persons principally concerned in the Event are: – a blind girl; two (twin) brothers; a skilled surgeon; and a curious foreign woman. I am the curious foreign woman. And I take it on myself – for reasons which will presently appear – to tell the story.

Having read all four of Wilkie Collins’ best known books in my pre-blogging days (The Woman in White, Armadale, No Name and The Moonstone), I am now exploring his less popular novels. I recently reviewed Basil and A Rogue’s Life, two of his earlier books from the 1850s. This one, Poor Miss Finch, was published in 1872 and unlike most of the books that preceded it, is not really a ‘sensation novel’, although it does have certain sensational elements (mysterious strangers, theft, assault, letters being intercepted, mistaken identities etc). What it is is an interesting study into what it’s like to be blind since infancy and the emotions a person experiences on learning that there may be a chance of regaining their sight.

The story is told by a Frenchwoman called Madame Pratolungo, the widow of a South American political activist, who has just arrived in the village of Dimchurch in England to take up a position as companion to Lucilla Finch. Lucilla has been blind since she was a child and her blindness has led to a strange phenomenon – she has developed an irrational fear of darkness and dark colours. Even knowing that someone is wearing a dark purple dress, for example, sends her into a panic.

Oscar Dubourg and his twin brother Nugent are newcomers to Dimchurch. Soon after their arrival, Oscar suffers a fit and learns that he has epilepsy. In the 19th century a common cure for epilepsy was to take nitrate of silver. Unfortunately, a side effect of nitrate of silver consumption is that the skin turns blue. When Oscar and Lucilla fall in love, Oscar feels secure in the knowledge that Lucilla will never be able to see him and need never be told that his face is dark blue. However, when Nugent introduces them to the German oculist Herr Grosse, it appears that there could still be hope for Lucilla after all.

This book handles the topic of blindness in a sensitive and intriguing way. It’s obvious that Collins had done a lot of research into the subject and the results are fascinating. He discusses the theory that when a person is blind their other senses improve to compensate for their lack of sight and he weighs up the advantages and disadvantages there would be if this person then regained their sight. I had never even thought about some of the aspects of blindness that are mentioned in the book. For example, there’s an interesting moment when Madame Pratolungo realises why Lucilla shows little regard for normal Victorian conventions and proprieties.

What did it mean?
It meant that here was one strange side shown to me of the terrible affliction that darkened her life. It meant that modesty is essentially the growth of our own consciousness of the eyes of others judging us – and that blindness is never bashful, for the one simple reason that blindness cannot see.

The characters, as usual, are wonderful – most of them anyway. I didn’t find Lucilla very likeable (she has a tendency to throw foot-stamping tantrums when she doesn’t get her own way) but I loved Madame Pratolungo – she was such an amusing and engaging narrator!

I cast all feminine restraints to the winds. I sat down with my legs anyhow, like a man. I rammed my hands into the pockets of my dressing-gown. Did I cry? A word in your ear – and let it go no farther. I swore.

We also meet Reverend Finch, Lucilla’s father, who chooses to recite Hamlet at the most inappropriate moments, and his wife, Mrs Finch, who is ‘never completely dressed; never completely dry; always with a baby in one hand and a novel in the other’. With Lucilla’s little half-sister Jicks’, Collins even makes a three year old girl into an unusual and memorable character:

This amazing apparition advanced into the middle of the room, holding hugged under one arm a ragged and disreputable-looking doll; stared hard, first at Oscar, then at me; advanced to my knees; laid the disreputable doll on my lap; and, pointing to a vacant chair at my side, claimed the rights of hospitality in these words:
“Jicks will sit down.”

Although I thought parts of the plot felt contrived, the story did become very gripping towards the end. This was an interesting and thought provoking read, and if you have enjoyed any other Wilkie Collins books, then I suspect you might enjoy this one too.