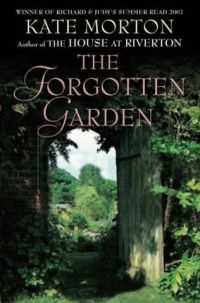 Kate Morton’s latest book, The Distant Hours, is getting a lot of attention at the moment but I thought that before I decided whether to buy it I should really read the previous two books of hers that have been sitting on my shelf unread for a long time. I’m so glad I finally decided to pick up The Forgotten Garden because, although it wasn’t perfect, I loved it overall.

In 1913, just before the beginning of World War I, a port master finds a little girl with a suitcase sitting alone on the docks at Maryborough, Australia. With no sign of the child’s parents and no clue to her identity, he takes the girl home with him, where he and his wife name her Nell and raise her as their own daughter. But what was Nell doing in Australia? Who were her real parents? And what is her connection with the mysterious Eliza Makepeace, writer of fairy tales?

When Nell dies in 2005, she leaves everything to her granddaughter, Cassandra – including a cottage in Cornwall, England. When Cassandra travels to Cornwall to investigate, she begins to uncover some secrets about her grandmother’s identity and attempts to solve the mystery of Cliff Cottage.

At first I thought I was going to have a problem with Kate Morton’s writing style. She has quite a flowery, descriptive style which you’ll either love or hate. For example:

Was it always this way? Did those with passage booked on death’s silent ship always scan the dock for faces of the long-departed?

As the book went on though, the writing bothered me less, because I was becoming so absorbed in the story. It had a wonderful atmosphere and was very reminiscent of The Secret Garden in places (the manor house, the invalid cousin, the walled garden – and Frances Hodgson Burnett even makes a brief appearance!) It also felt a bit like a Daphne du Maurier book in places (particularly the Cornwall scenes) and the Swindell family whom Eliza lives with in turn-of-the-century London could have come straight from a Dickens novel. Some of Eliza’s fairy tales are even included in the book which I thought was a nice touch although I wasn’t too impressed with the stories themselves.

The biggest problem I had with this book was the constant jumping around in time and place. One chapter would be set in London in 1900, the next in Brisbane in 2005 and the next in Cornwall in 1975, which disrupted the flow of the story and made it difficult to follow. We also switch narrator with every chapter, which made me even more confused, particularly as there was almost nothing to differentiate between the voices of Cassandra, Nell and Eliza. It was too easy to forget who I was reading about. Eliza’s storyline was by far the most interesting of the three though and I think it would probably have worked on its own as a straight historical fiction novel.

The solution to the mystery was made very obvious to the reader from early on in the book, so when it was finally revealed it came as an anti-climax. This didn’t really spoil the story for me but it was slightly frustrating to watch Cassandra trying to solve the mystery and knowing that she was getting it completely wrong. I would have appreciated it if some of the clues could have been kept from the reader until nearer the end.

Other than those few points, I loved this book, which was great because I really hadn’t expected to. For such a long and complex book it was surprisingly quick to read.

Those of you who have read all of Kate Morton’s books, how does this one compare to The House at Riverton or The Distant Hours?

7 thoughts on “The Forgotten Garden by Kate Morton”