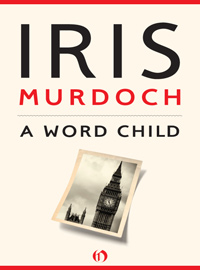 Iris Murdoch is not a writer I’m very familiar with. A few years ago I read her Booker prize-winning novel, The Sea, The Sea, but have never investigated her other books. And so I’d like to thank Open Road Media for making A Word Child available through Netgalley and re-introducing me to Murdoch’s work.

The ‘word child’ of the title is Hilary Burde, our narrator.  Following an unhappy childhood Hilary’s future prospects looked bleak, until he discovered a passion for words and languages and embarked on a promising academic career at Oxford. However, when we first meet Hilary at the beginning of the novel, he is working as a low grade civil servant in London. We don’t know at first why he left Oxford, but we are given hints that he had been involved in some kind of scandal there – and when Gunnar Jopling, a figure from his past, comes to work in Hilary’s office building, everything starts to become clear.

The book has an interesting structure, with each chapter headed by a day of the week. Hilary has tried to establish order and routine in his life by having certain things that he always does on certain days of the week (dinner with friends on Thursday, visiting his sister on Saturdays, for example) and the novel follows him as this monotonous cycle of events is gradually thrown into disarray. Murdoch’s writing never becomes over descriptive or flowery, yet she manages to convey vivid images of the stations on the London Underground, the yellow fog that hangs over the Thames, the Peter Pan statue in Kensington Gardens. She also gives an amusingly accurate portrayal of daily office life, where Hilary is relentlessly teased by two of his colleagues, and there are other moments of humour involving Hilary’s lodger, Christopher.

Hilary himself is not an easy character to like. He controls every aspect of his sister Crystal’s life and the way he behaves towards his poor girlfriend, Thomasina, is even worse. And yet I could still empathise with him at times because his dysfunctional relationships and desperate attempts to stay in control are signs of the unhappiness and inner turmoil from which he’s suffering. I really wanted Hilary and the other main characters to have a happy ending and although I’m obviously not going to tell you whether they did or not, I did think the ending was stunning: dramatic, surprising and very satisfying.

I enjoyed this book very much and loved Murdoch’s insights into topics such as redemption, forgiveness and moving on after a tragedy. It was such a surprise because I wasn’t expecting something so accessible and readable. I’d recommend A Word Child to anyone who may be wondering where to begin with Iris Murdoch.

5 thoughts on “A Word Child by Iris Murdoch”