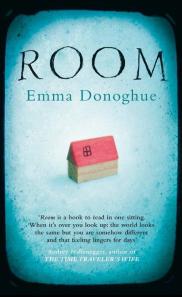 It’s been more than a month since I read this book but it has taken me until now to find the inspiration to post about it. That’s not to say that I didn’t enjoy the book, but as I’ve said before I find it difficult to write about a book that has attracted so much attention and already been raved about by such a lot of people.

I’m sure most of you will already have seen so many reviews of Room that you won’t need a synopsis, but for those of you who do, the plot can be summarised very quickly. The story is narrated by Jack, a five-year-old boy who has spent his whole life living with his mother in a converted shed measuring eleven foot square. His mother had been kidnapped seven years ago and Jack was born in captivity. He has no idea that a world exists outside Room and apart from Ma and Old Nick, the man who is keeping them captive, he has never seen another human being.

The story could have been very harrowing, but I was surprised to find it was less upsetting than I thought. There are a lot of aspects of the plot that are very disturbing and uncomfortable to read about but there are also some positive things that come out of the story: the strong mother/son bond, for example, and the way Jack’s mother uses her imagination to keep him busy and entertained. Being told from a five-year-old’s point of view, there’s nothing very graphic but there are always dark undercurrents beneath the surface. The trauma of Ma’s kidnapping and the abuse she suffered at the hands of Old Nick are only lightly touched on; we know they happened but aren’t given many details because those are things Jack is too young to really understand.

When I first started reading I found Jack’s narration very irritating and I had an awful feeling I was going to have to abandon the book after a few pages. Luckily though, it seemed that I just needed to get used to it. Once I got further into the story I didn’t have a problem with Jack’s voice and even stopped noticing his unusual language after a while. I can see why Donoghue chose to use a child narrator to show the situation through the innocent eyes of a child born into such an unnatural environment. Jack doesn’t know that a different way of life is possible so is quite content with how things are and when Ma finally decides to ‘unlie’ and tell him about Outside, he finds it almost impossible to believe that such a place really exists. His mother was of course fully aware of what had happened and it would have been interesting to have read the same story from her perspective as well, but of course it would then have been a completely different and probably much more traumatic book.

I’m not sure this is a book I would want to read again, but it did keep me completely gripped and I’m glad I’ve finally read it, as it hadn’t really appealed to me when everyone seemed to be reading it last year.

Have you read Room? Do you think I would like any of Emma Donoghue’s other books?

9 thoughts on “Room by Emma Donoghue”