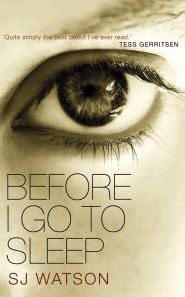 Christine’s doctor advises her to keep a journal. If she records everything she learns each day, he says, perhaps it will help to bring her memories back and allow her to make sense of what has happened. Then one day Christine picks up her journal and sees that she has written the words DON’T TRUST BEN. But why shouldn’t she trust him? What is going on?

SJ Watson’s psychological thriller, Before I Go to Sleep, is one of the most gripping books I’ve read this year. My only regret is that I didn’t save it to read at the weekend when I would have fewer interruptions. Reading during the week I had to tear myself away from it to go to work or to bed. What makes the book so suspenseful is the uncertainty about what exactly is happening. With the entire story told from Christine’s perspective we don’t know any more than she does. It’s possible that Ben could be genuine – it’s also possible that everything he says is a lie. And what about Dr Nash? Could he also be lying to her? Christine doesn’t know and neither do we.

It’s hard to imagine anything worse than waking up each day, not knowing where you are (or even who you are), not able to recognise the man who says he’s your husband, having to learn everything about your life all over again. By losing her memory Christine has lost her whole identity. As she says to herself at one point in the novel, “What are we, if not an accumulation of our memories?” She was in such a horribly vulnerable situation and I felt afraid for her. The atmosphere throughout the book is very unsettling and although I had a few guesses, the ending still managed to shock me.

Without spoiling the story for you there’s nothing more to say other than to echo all the other glowing reviews out there and to tell you that in my opinion all the hype surrounding this book is justified!

I received a copy of this book from Transworld for review

9 thoughts on “Before I Go to Sleep by SJ Watson”