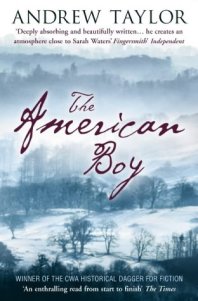 After I read The Anatomy of Ghosts earlier in the year, I asked for opinions on Andrew Taylor’s other books. Well, I’d like to thank the three people who left comments recommending The American Boy (published in the US as An Unpardonable Crime) as I thought this one was even better than The Anatomy of Ghosts. As someone who loves classic sensation novels (Wilkie Collins, Mary Elizabeth Braddon, Ellen Wood etc) it’s maybe unsurprising that I enjoyed this book so much. It has all the elements of a sensation novel and although it was published in 2003 it almost feels as if it could have been written in the 19th century.

The American Boy is set in England during the final months of the reign of George III. The story begins in September 1819 when our narrator, Thomas Shield, is starting a new job as a teacher at a small private school in the village of Stoke Newington. One of the boys at the school is the ten-year-old Edgar Allan Poe, the ‘American boy’ of the title. Shield is given special responsibility for tutoring Edgar and his best friend, Charles Frant, and through the two boys he becomes acquainted with two rich banking families – the Frants and their cousins, the Carswells. He soon becomes caught up in the dramas that are unfolding within the Frant and Carswell families and when two murders take place it seems that Shield’s own life could also be in danger.

The plot is so intricate and complex I won’t even try to go into any more detail, but in addition to the murders, there’s also a disputed will, mistaken identities, family secrets, betrayal, revenge and even romance. Thomas Shield’s adventures take place in a variety of wonderfully atmospheric locations from the dark, foggy streets and over-crowded slums of London to the snowy landscape of the Carswells’ country estate in Gloucestershire, complete with an ice house and ruined abbey. Taylor made his settings feel vivid and real without going into pages and pages of description.

I should point out that although Edgar Allan Poe does have an important part to play in the story, he’s really just a minor character. I actually thought this whole aspect of the book was unnecessary as the plot would have been strong enough without it and a fictional character could easily have been used in his place. I’m not complaining as I do like Poe and found his brief appearances interesting, but I don’t want to mislead anyone into thinking this is a book about Poe because it really isn’t.

Although I hadn’t included this book on my list for the RIP challenge, I’m going to count it as my first book for RIP anyway (I don’t know why I bother making lists for challenges as I never, ever stick to them!) The American Boy isn’t what I would describe as a scary book, but it is a very dark and suspenseful mystery – a perfect book to curl up with and enjoy at this time of year.

I know it’s a cliché but I didn’t want to put this book down and the very short chapters made it even more tempting to keep reading. If it hadn’t been so long (500 pages) I could have read it all in one sitting. I also appreciated the author’s attempts to make the book feel like an authentic 19th century novel through his use of language and Thomas Shield’s narrative style. It won’t be for everyone though; you either like this type of book or you don’t, but for anyone who has enjoyed books such as The Quincunx by Charles Palliser, The Meaning of Night by Michael Cox or The Woman in White by Wilkie Collins, I can highly recommend this one.

20 thoughts on “The American Boy by Andrew Taylor”