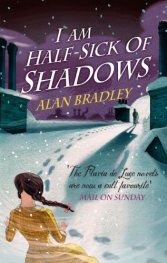 I hope everyone had a great Christmas! I don’t usually read a lot of Christmas-themed books but the one I’m posting about today, I am Half-Sick of Shadows, was a perfect seasonal read.

I know not everyone will be familiar with Alan Bradley’s books, so for those of you who need some background information I can tell you that I am Half-Sick of Shadows is the fourth in a series of mystery novels set in the 1950s and featuring eleven-year-old amateur detective and chemistry genius, Flavia de Luce. Flavia lives with her father and her two older sisters Ophelia (Feely) and Daphne (Daffy), at Buckshaw, their family estate near the small English village of Bishop’s Lacey. Other recurring characters include the de Luces’ two servants, Mrs Mullet and Dogger, as well as the local vicar, the doctor, Inspector Hewitt and several more of the villagers.

At the beginning of this fourth instalment, Flavia’s father is having financial difficulties and in an attempt to bring in some money, he allows the cast and crew of Ilium Films to move into Buckshaw to do some filming over the Christmas period. While the snow falls outside, the people of Bishop’s Lacey gather at Buckshaw to watch the two stars, Phyllis Wyvern and Desmond Duncan, give a special charity performance of Romeo and Juliet. Things go badly wrong, however, and a murder takes place. With the de Luce family and all their neighbours snowed in overnight, there’s a long list of suspects. Flavia begins to investigate, but before she can concentrate on identifying the murderer she needs to finish working on a special project of her own: a trap to catch Santa Claus on his way down the chimney!

I have enjoyed all three of the previous books in this series, but I think I am Half-Sick of Shadows could possibly be my favourite so far. It took a long time (almost half the book) before the murder took place and the actual mystery began – and it was probably the weakest mystery in the series too – but that wasn’t a problem for me at all. I don’t read these books for the murder mystery plots; I read them because I love Flavia and love reading about her adventures.

As well as being shorter than usual, this book has a different feel to the first three because it is set entirely within the confines of Buckshaw. This means we get to see more of Flavia’s interactions with her family members and we also have the chance to learn more about Dogger, one of the most interesting characters in the series. I’ve mentioned before that I was starting to get impatient with Feely’s and Daffy’s nastiness towards their younger sister, but there seemed to be a slight change in Daffy’s relationship with Flavia in this book and I almost liked her at times! There was also a hint that maybe Feely didn’t really hate Flavia and that there might be another reason for her cruel behaviour. I’m still hopeful that the three of them will be friends by the end of the series, but we’ll have to wait and see – I’m already looking forward to the fifth book to find out if there are any further developments.

I’m glad I was able to find time to read this book last week as it really was perfect for the Christmas season. Oh, and in case you’re wondering, the title comes from the poem by Tennyson, The Lady of Shalott.