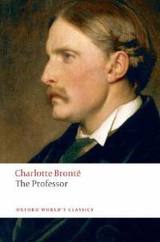 The Professor was Charlotte Brontë’s first novel. She was unable to find a publisher for it during her lifetime and it was eventually published posthumously in 1857. Like Jane Eyre and Villette, this book is written in the first person, but with one difference – the narrator is a man. This is interesting as it shows us Charlotte’s views on how a man would think and behave and what his feelings towards women might be.

The narrator’s name is William Crimsworth, and at the beginning of the novel he is starting a new job as a clerk, working for his brother Edward, a rich mill-owner. However, William finds Edward impossible to get along with – he’s cruel and cold-hearted and treats William badly. Finding himself out of work again, William takes the advice of another businessman, Mr Hunsden, and goes to Belgium to teach English at a boys’ school in Brussels. Here he becomes involved with two very different women: one is Zoraide Reuter, the headmistress of the neighbouring girls’ school, and the other is a poor friendless student-teacher, Frances Henri.

This is the third book I’ve read by Charlotte Brontë. I first read Jane Eyre when I was a teenager and it immediately became one of my favourite books, but I didn’t begin to explore her other work until just last year, when I read Villette. Villette, like this book, is set at a school in Brussels and in many ways is a very similar story to The Professor, but with a female narrator and a more complex, layered plot. In both The Professor and Villette, Charlotte was able to draw on her own personal experience of teaching and studying in Brussels. This is obvious both in her descriptions of the city and in the way she could write so knowledgeably about education and the relationship between teachers and pupils.

What I love about Charlotte Brontë’s writing, as I mentioned in my earlier post on the author, is the way she writes about feelings and emotions. In The Professor she perfectly captures the loneliness and isolation a man might feel on arriving in an unfamiliar country with no money and without a friend in the world.

William is not as sympathetic a character as he should be though, due to Charlotte Brontë expressing some of her own views and prejudices through his narration. There’s a lot of racism and anti-Catholicism throughout this story, particularly when William is describing the girls in the school, making assumptions about them based on their nationality and considering them inferior to Protestant English girls. I’m sure it’s not a coincidence that the scheming, manipulative Zoraide Reuter is Catholic, while the quiet, honest Frances is Protestant (and half-English). Even allowing for the fact that the book was written in the 19th century, some of these passages were uncomfortable to read. And because I could never really warm to William’s character, I didn’t find this book as moving as I might have done otherwise.

Brontë also includes a lot of French dialogue in this novel, which it is assumed that the reader can understand. Some editions of the book provide translations in the notes, but the French is not translated in the original text and it can be frustrating to feel that you might be missing out on something essential to the plot. Also, the constant references to ‘physiognomy’ started to really irritate me (physiognomy is the concept of judging a person’s character based on their appearance). The word seemed to appear on almost every page, whenever William met someone new!

I know I’m probably giving the impression that I didn’t enjoy this book, but that’s not true. Charlotte Brontë’s writing is beautiful and for that reason alone I would say this book is definitely worth reading. Just don’t choose this one as a first introduction to Charlotte’s work – my recommendation would be to start with Jane Eyre and then move on to Villette before deciding whether to try The Professor. I can’t comment on her other book, Shirley, as I still haven’t read that one – maybe later in the year!

17 thoughts on “The Professor by Charlotte Brontë”