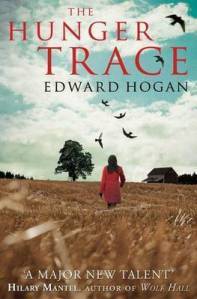 The Hunger Trace is set in a small English village where three very different people are all trying to cope with the death of wildlife park owner David Bryant. There’s David’s wife, Maggie; his son from a previous marriage, Christopher; and their neighbour, Louisa. Throughout the pages of this novel we see how each character comes to terms with losing David and how they gradually learn to get along with each other.

Although there are some moments of drama when a fourth character, Adam, is introduced and when Derbyshire is hit by the worst floods in years, The Hunger Trace is definitely more of a character-driven novel but despite it being quite slow paced I was never bored. All of the main characters are interesting, three-dimensional people each with his or her own set of problems and secrets.

As David’s widow, Maggie is left to run his business which has been having financial difficulties, to take responsibility for the welfare of his animals, and to look after her stepson Christopher. Feeling lonely and isolated, she tries to befriend Louisa, a falconer who lives alone with her birds of prey. However, Louisa has never liked Maggie, who she sees as just one of a long series of women who have passed in and out of David’s life over the years. Louisa herself was connected to David by a terrible secret the two had shared since they were teenagers and now that he’s gone she has little interest in anything apart from her hawks.

Christopher, although it wasn’t actually stated in the book, seems to have a form of autism or something similar which he is taking medication for. He sometimes has trouble relating to other people (including his stepmother) and is often misunderstood; he’s also obsessed with Robin Hood and spends most of his time at college trying to prove that his hero was a real historical figure! Christopher has a habit of saying ‘erm’ before almost every word, which did get a bit irritating to read, but it’s this kind of attention to detail that made all of Edward Hogan’s characters feel so realistic and believable. I initially found Maggie the easiest to like of the three, but eventually I began to warm to the others, particularly Louisa, who I thought was a wonderful character and so much more complex than just the unfriendly, hostile woman she appeared to be at the beginning of the book.

If you’re wondering what the title of the book means, it’s a term relating to falconry and its significance is explained during the course of the story. I loved the whole falconry aspect of the book, which is surprising as it’s not something I would have expected to find so fascinating to read about. This was quite an unusual novel and maybe not one that I would normally have chosen to read, but I’m glad I did as I was very impressed by The Hunger Trace and by the quality of Edward Hogan’s writing!

6 thoughts on “The Hunger Trace by Edward Hogan”