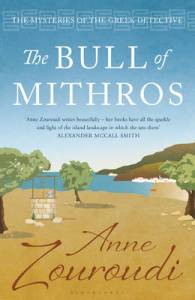 This is the sixth title in Anne Zouroudi’s “Greek Detective” mystery series. I haven’t read any of the five previous novels but that wasn’t a problem at all as this one worked perfectly as a standalone mystery.

The story is set on the small Greek island of Mithros, where the peace and tranquillity of island life is broken when a man is robbed and another killed by the escaping thieves. Seventeen years later, a boat appears in the bay and a stranger is thrown overboard. Until he can provide identification he is forced to stay on the island, where several of the islanders begin to recognise him. Is he connected in some way to the crime that took place all those years earlier? Soon another man arrives on the island of Mithros – this is Hermes Diaktoros, who has come to investigate. But where has he come from and who is he working for?

Hermes Diaktoros is a fascinating and unusual detective, a character shrouded in mystery. His name suggests a connection with Greek mythology (Hermes was the messenger of the gods) and there is definitely something slightly otherworldly about him. We learn very little about his past and he never reveals the identity of his employers either. He is referred to throughout the story as ‘the fat man’, which I thought might be irritating at first but it actually wasn’t. Despite him being such an enigmatic character (or maybe because of it) I really liked the fat man. He also reminded me in some ways of Poirot and in fact I think this series might appeal to Agatha Christie readers.

The pace of the story is gentle and relaxed, but not too slow. It also has a beautiful, atmospheric setting and would be the perfect book to take with you if you’re planning to visit a Greek island this summer! I enjoyed meeting Hermes Diaktoros for the first time and I didn’t feel I was at any disadvantage because of not having read the other novels first. Now that I’ve discovered this series I’d definitely like to read the earlier books and see how the fat man solved his previous five mysteries.

15 thoughts on “The Bull of Mithros by Anne Zouroudi”