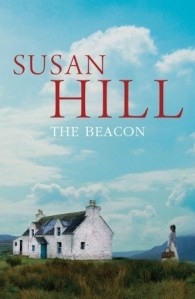 Until I read The Beacon last weekend, the only Susan Hill book I had read was one of her ghost stories, The Small Hand, which, for me, was probably not the best introduction to her work. I loved the atmosphere she created but I didn’t find it very original and was disappointed by it. The Beacon is a very different type of book. It’s not a ghost story – I would describe it as a family drama – but it’s still very dark and haunting and I enjoyed it much more than The Small Hand, so I wish I had started with this one instead.

The Beacon is the name of the Prime family’s farmhouse, located somewhere in the north of England. A dark, lonely path leads from the village up to The Beacon, high on a hill, and in stormy weather the house is battered by howling winds. May Prime, now fifty years old, has lived here for her entire life, apart from one year when she went away to university in London. May has never married and since her father’s death has been caring for her elderly mother, Bertha. When Bertha dies too, May is left alone to reflect on her own life and the lives of her brother, Colin, and sister, Berenice. There’s another brother too – his name is Frank – but May has not seen him for many years, since he betrayed his family and destroyed their childhood memories. Now that both of their parents are dead, will May and her siblings ever be able to forgive Frank for what he has done?

The Beacon is a short novella and can easily be read in an hour or two, but despite only being 160 pages long it’s a very powerful story. At first it appears to be just a simple tale of a farmer’s daughter, her family and friends and her experiences of university, but it soon becomes infused with a sense of mystery and suspense. From the beginning May gives us hints that her brother Frank has done something terrible – so bad that May and her other siblings don’t even want to tell him about their mother’s death – but we have to wait until halfway through the story before we find out exactly what it was that alienated him from the rest of the family. I wish I could tell you what he did, but the revelation is the pivotal point of the story and may not be as effective if you know what it is in advance!

As with The Small Hand, my favourite thing about this book was the atmosphere. It’s so bleak and unsettling, and there’s a real feeling of isolation, claustrophobia and loneliness. I thought the portrayal of May’s mental state and the terrors she experienced while trying to start a new life in London was particularly well done, as were her earlier memories of the joy she felt as a child learning to read and write. There’s less focus on the lives of Colin and Berenice, but Frank comes to the forefront of the story in the second half of the book and we learn more about his character and what may have caused him to behave the way he did.

Although The Beacon is one of those books where ‘nothing really happens’, I still found it surprisingly gripping. The ending is very ambiguous and made me question everything I had just read and wonder what was true and what wasn’t. It could be interpreted in several different ways and I was left with plenty to think about even after finishing the final sentence.

13 thoughts on “The Beacon by Susan Hill”