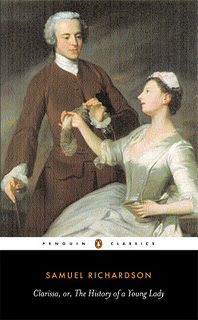 I have never been so relieved to reach the end of a book! It’s not that I didn’t enjoy Clarissa, but when I embarked on JoAnn and Terri’s year-long group read back in January, I don’t think I fully understood what a huge commitment it was going to be. But even though reading Clarissa did sometimes feel like a chore, there was still something very compelling about it and I knew I would keep reading until I had finished, however long it took.

Clarissa, or The History of a Young Lady, published in 1748, is the story of Clarissa Harlowe, a beautiful and virtuous young woman who suffers at the hands of the unscrupulous ‘libertine’ Robert Lovelace. Clarissa has long been loved and admired by her friends and family, but this changes when she refuses to marry Mr Solmes, the man her parents have picked out for her. Forbidden to communicate with Lovelace and under increasing pressure to accept Solmes, Clarissa becomes virtually a prisoner in her family’s home. Isolated and desperate, she agrees to escape with Lovelace but soon finds herself at the mercy of cruel schemes designed to break down her virtue and attack her moral integrity.

Clarissa is completely epistolary – that is, the whole story is told in the form of 537 letters dated between 10th January and 18th December of the same year. The original aim of our group read was to read each letter on or around the dates given in the book, although that quickly became impossible because some letters were undated, multiple letters were sent by different people on the same day, and other letters were received in the wrong order or withheld until weeks later. Samuel Richardson must have been amazingly well organised, as there are also lots of cross references, with letters referring to something that had been mentioned in a previous letter, sometimes one that had been written many months earlier. This is where reading the Kindle version of the book was a disadvantage, as I would have found it so much easier to flick backwards and forwards in the paperback version!

There are four main correspondents in the book: Clarissa herself, her best friend Anna Howe, Lovelace and his friend Mr Belford, and I appreciated the way Richardson attempted to give each of them a different, distinctive voice of his or her own – something so important in an epistolary novel. There are letters sent to and from other characters too, but these are the four we spend most time with and get to know over the course of the novel.

I didn’t dislike Clarissa because, really, there was nothing to dislike but I do find perfect characters boring to read about and I couldn’t help wishing she’d had a few flaws. Still, if Clarissa had been flawed then Lovelace would probably not have been so attracted to her, his plots would have lost their effect and there would have been no story for us to read! I did admire the way she stayed true to herself and never tried to take the easy way out and I could certainly sympathise with her as the full extent of Lovelace’s wicked schemes became apparent and we could see how she had been manipulated and tricked by him. As for the Harlowes, they were completely vile, particularly her father, brother James and sister Arabella, who gave no thought to what Clarissa might want and were prepared to force her into marriage with a man she didn’t love because of the advantages it would bring to the family. The one bright spot in Clarissa’s life and the thing that sustains her through all her troubles is her friendship with Anna Howe. Anna’s personality is very different to Clarissa’s – she’s a more forceful, outspoken person than Clarissa – so she sometimes gives her the wrong advice but there’s obviously a lot of love and warmth between the two of them.

Apparently Samuel Richardson was disappointed to discover that so many of his readers actually liked Lovelace! That was not what he intended at all and he even adds a footnote to this effect at the end of one of the letters. Lovelace is a despicable person and really is the villain Clarissa’s family make him out to be, but he is also a great character and whenever he makes an appearance the story becomes imbued with a new energy and sense of excitement. In comparison to the letters written by Clarissa, Anna or Belford, his letters are more fun to read: flamboyant and entertaining – filled with poetry, quotations, classical references and lots of self-congratulations and flourishes. He revels in his badness and brags about it in his letters to Belford:

“Here have I been at work, dig, dig, dig, like a cunning miner, at one time, and spreading my snares, like an artful fowler, at another, and exulting in my contrivances to get this inimitable creature, absolutely into my power.”

Our fourth letter writer, Belford, is probably the character who changes and develops the most over the course of the novel. At first I found him quite bland and it seemed his only real purpose in the story was as an outlet for Lovelace’s letters, although there are hints from early on that Belford, despite also being described as a libertine, disapproves of his friend’s behaviour:

“‘Tis a seriously sad thing, after all, that so fine a creature should have fallen into such vile and remorseless hands: for, from thy cradle, as I have heard thee own, thou ever delightedst to sport with and torment the animal, whether bird or beast, that thou lovedst, and hadst a power over.”

Belford eventually begins to emerge as a decent person with a sense of honour and responsibility, although he does still retain some affection for Lovelace – even when Lovelace sends him letters like this:

“Confound thee for a malicious devil! I wish thou wert a post-horse, and I upon the back of thee! how would I whip and spur, and harrow up thy clumsy sides, till I make thee a ready-roasted, ready-flayed, mess of dog’s meat; all the hounds in the country howling after thee, as I drove thee, to wait my dismounting, in order to devour thee piece-meal; life still throbbing in each churned mouthful!”

Richardson’s prose really is wonderful – it can be alternately dramatic and moving, flippant and funny, or beautiful and thought-provoking. I’ve included a sample of quotes in this post already, but here are a few others I particularly liked:

“We must not, in short, expect that our roses will grow without thorns: but then they are useful and instructive thorns: which, by pricking the fingers of the too-hasty plucker, teach future caution. And who knows not that difficulty gives poignancy to our enjoyments; which are apt to lose their relish with us when they are over easily obtained?” – Clarissa to Anna Howe

“You must not wonder at my inquiries, Mr. Belford, said she; For who is it, that is to undertake a journey into a country they never travelled to before, that inquires not into the difficulties of the road, and what accommodations are to be expected in the way? I gave her a brief account of the poor man’s terrors, and unwillingness to die: and, when I had done, Thus, Mr. Belford, said she, must it always be with poor souls who have never thought of their long voyage till the moment they are to embark for it.” – Belford to Lovelace

“What briars and thorns does the wretch rush into (a scratched face and tattered garments the unavoidable consequence) who will needs be for striking out a new path through overgrown underwood; quitting that beaten out for him by those who have travelled the same road before him!” – Lovelace to Belford

“And yet great engines are often moved by small springs. A little spark falling by accident into a powder-magazine, hath done more execution in a siege, than an hundred cannon.” – Lovelace to Belford

“And I think, that smooth love; that is to say, a passion without rubs; in other words, a passion without passion; is like a sleepy stream that is hardly seen to give motion to a straw. So that, sometimes to make us fear, and even, for a short space, to hate the wretch, is productive of the contrary extreme.” Anna Howe to Clarissa.

There were times when I just couldn’t believe how slowly I was progressing through this book. I don’t think it was actually the length that was the problem – it was the repetitiveness. Richardson could literally spend hundreds of pages describing the events of one or two weeks in Clarissa’s life. The Harlowe family’s endless attempts to get Clarissa to give in and marry Mr Solmes went on and on and on…going round in circles, doing nothing to move the plot forward other than to reinforce how helpless and trapped Clarissa was. After Clarissa leaves her parents’ house and falls into Lovelace’s clutches, things do get more exciting – although this book was written in the 18th century, not the 19th, the plot has a lot of the elements we find in the Victorian sensation novels written more than a hundred years later: escapes and abductions, disguises, duels, wills and inheritances – but the pace is still painfully slow.

When I finally reached the end of volume 9 of 9 it was with mixed feelings: relief, a sense of accomplishment and also sadness – after spending a whole year with Clarissa, Lovelace, Anna and Belford, I now feel that something is missing from my life. If you’ve read Clarissa, either as part of this group read or in the past, I’d love to know what you thought of it!