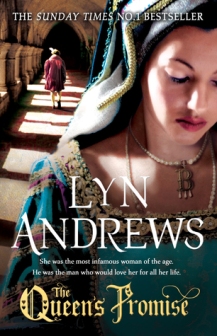 Everyone knows that Anne Boleyn was one of the six wives of Henry VIII, but did you know that before her marriage to the King, Anne was secretly betrothed to another Henry – Henry Percy, son and heir of the 5th Earl of Northumberland? The Queen’s Promise is the story of Anne and Henry’s relationship.

When you try a new author for the first time you can never be quite sure what to expect. Until I read The Queen’s Promise I was unfamiliar with Lyn Andrews’ work, but after doing some research I discovered that she has written many bestselling family sagas which, although they have obviously been very successful, don’t look like books that would appeal to me. The Queen’s Promise seems to be a new genre for Andrews; I think this is her first historical fiction novel and based on this one, I hope she writes more. I’ll admit that when I first started to read it I thought it would be just another Tudor court romance – an impression not helped by the title and cover of the novel which do absolutely nothing to set the book apart from others of this type – but I was pleased to find that although there was certainly a romantic aspect to the story, it also had a detailed and well-researched historical background with almost as much attention given to the history and politics of the period as to the romance between Anne and Henry Percy.

Anne’s marriage to Henry VIII and the events leading to her death have been well documented in both fiction and non-fiction. However, in this novel there is actually more focus on Henry Percy than there is on Anne, which was the right choice in my opinion. Anne is such a popular subject for historical fiction and there’s not much that can be said about her that hasn’t been said before, but Henry Percy, on the other hand, is a historical figure who is less well known and Andrews does go into quite a lot of depth on not just his relationship with Anne, but also his life before and after Anne.

As so much of Henry’s life was spent in Northumberland, we are given a lot of information about the Border Reivers, who raided both sides of the English/Scottish border, and Henry’s role as Lord Warden of the Marches. Life in the borders was wild and dangerous in those days and it was not easy to maintain law and order there. We see how difficult it was to keep the peace between Northumberland’s feuding families and protect the people from outlaws while always being aware that there could be an attack from the Scottish side of the border at any time. I’m always looking out for books set in Northumberland as I’m from the North East myself and it was interesting to read about so many places I know – Alnwick, Hexham, Prudhoe, Warkworth – and to have the chance to add to my knowledge of the region’s history.

I really liked the way Henry Percy is portrayed as being refreshingly different to most of the other young men at the Tudor court – loyal, sincere and honest, but also quiet, cultured and sensitive, qualities which sadly make him a disappointment to his father, the Earl. It’s not a happy story for Henry – he also has to fight a recurring illness and to come to terms with being forced into a loveless marriage to Mary Talbot, the Earl of Shrewsbury’s daughter – and of course it isn’t a happy story for Anne either. I did like the young Anne we meet in the earlier chapters of the book, though after she begins her rise to becoming Queen she becomes much harder and a less sympathetic character.

Much of Henry’s and Anne’s story is seen through the eyes of Henry’s friend and squire, Will Chatton, who joins Henry’s household as a boy of eleven and later becomes a successful merchant. Will and his family are purely fictitious characters but they add another interesting angle to the story. As well as allowing us to observe Henry and Anne from a third perspective, the inclusion of the Chatton family gives us the chance to explore another side of Tudor society, away from life at court.

I enjoyed this book, after my initial concerns had proved to be unfounded. It was interesting, very readable and the focus on Henry Percy makes it slightly different from other Anne Boleyn-based historical fiction. It also raises the intriguing question of whether, if Anne and Henry had been allowed to be together as they wished, what impact would this have had on the future of the royal family and the whole course of history?

6 thoughts on “The Queen’s Promise by Lyn Andrews”