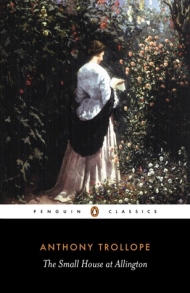 This is the fifth of Anthony Trollope’s Chronicles of Barsetshire, a series of six novels set in the fictitious county of Barsetshire. I’ve read the first four and enjoyed them all, so I knew what to expect when I picked up The Small House at Allington. I have discussed Trollope’s writing style in my posts on the previous books in this series but will repeat that if you like Victorian authors who talk directly to the reader, who create well-rounded and nuanced characters and who fill the pages of their novels with gentle humour and insightful observations on human nature, then I would highly recommend trying the Barsetshire series.

The Small House at Allington (not to be confused with the adjacent Great House, home of the Squire of Allington, Christopher Dale) is where the Squire’s widowed sister-in-law, Mary Dale, lives with her two daughters, Bell and Lily. When Lily falls in love with Adolphus Crosbie, a friend of her cousin Bernard’s, he proposes and she accepts. After discovering that the Squire is not planning to give his niece a dowry, Crosbie begins to reconsider their engagement and during a visit to Courcy Castle he becomes engaged to another woman – Lady Alexandrina de Courcy, whose family, he hopes, will help him to rise in the world. Even after learning how she has been betrayed, Lily swears that she still loves Crosbie and will never marry anyone else, but will she change her mind when she discovers that she has another admirer?

The other man in love with Lily is Johnny Eames, a junior clerk who works at the Income Tax Office in London. At the beginning of the story, Eames is a shy, awkward young man described as a ‘hobbledehoy’ (isn’t that a great word?) and is apparently based on the young Trollope himself. As Johnny begins to gain more experience of the world and grows in confidence, will he ever find the courage to escape the clutches of his landlady’s daughter Amelia and propose to Lily?

Trollope devotes such a lot of time to introducing us to his characters – giving us every detail of their appearance and personality, describing their emotions and taking us through every step of their thought processes as they struggle to deal with the various dilemmas they find themselves facing. This has the effect of making his novels very long, but it also means that his characters feel like real, believable human beings. You won’t necessarily like all of them, but there will always be a few you can understand and identify with. Adolphus Crosbie, for example, could be seen as the ‘villain’ of the book, but he is also a complex and realistic character. He knows he’s doing the wrong thing but still can’t seem to stop himself from doing it and is punished by finding himself trapped in a loveless marriage to Lady Alexandrina.

One character I could not understand or identify with was Lily Dale! It was so frustrating that even after the way Crosbie treats her she insists that she loves him and forgives him and will think of herself as a widow for the rest of her life. I don’t know how her mother and sister managed to have so much patience with her (although being patient was maybe not the best way to deal with Lily – in Trollope’s day Lily might have seemed an admirable, romantic character but to me she came across as silly and irritating). There are some great female characters in the Chronicles of Barsetshire – Miss Dunstable, Mary Thorne, Eleanor Harding – but Lily is not one of them. I thought Bell, the other Dale sister, was a much more interesting heroine, although her storyline in which the Squire tries to convince her to marry her cousin Bernard, a man she likes but doesn’t love, is given less attention than Lily’s.

We also meet a variety of other interesting characters in this book; my favourites this time were the good-natured, well-meaning Earl de Guest, his sister Lady Julia, and the inhabitants of Mrs Roper’s boarding house in London. A few of our old friends from earlier in the series are here again too; Lady Dumbello (the former Griselda Grantly) appears in an amusing sub-plot involving Plantagenet Palliser, who I’m looking forward to reading more about in the Palliser series. There’s also a very brief appearance from Mr Harding, one of my favourite characters from The Warden and Barchester Towers, and I was disappointed that we didn’t see more of him.

It’s not often that Trollope surprises me (his plots are usually so predictable he sometimes even tells us in the first chapter what is going to happen in the rest of the book) but this time he did. While some of the characters got their happy ending – or unhappy ending in some cases – for others it felt that things had been left unresolved and so the story did not end in quite the way I would have expected at the beginning.

The Small House at Allington was apparently our former Prime Minister, John Major’s, favourite book. It isn’t mine, or even my favourite of the Barsetshire novels, but despite being irritated by Lily I did still love it and thought it was an improvement on the previous one, Framley Parsonage, which I had found slightly disappointing after the wonderful Barchester Towers and Doctor Thorne. I am now looking forward to reading The Last Chronicle of Barset and finishing the series!

11 thoughts on “The Small House at Allington by Anthony Trollope”