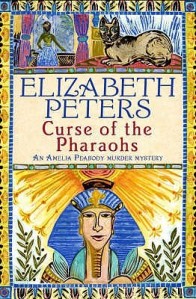 This is the second book in Elizabeth Peters’ Amelia Peabody series. I read the first one, Crocodile on the Sandbank, two years ago in January 2012 and enjoyed it, so I’m not sure why it has has taken me so long to get round to reading this one.

The Curse of the Pharaohs is set in the late Victorian period and begins five years after the previous book ended. Amelia is happily married to the archaeologist Radcliffe Emerson and they now have a young son, Ramses. Despite longing to return to their work in Egypt, Amelia and Emerson have spent most of the last five years at home in England because they’re unable to agree on what to do about Ramses. But when Lady Baskerville, an old friend of Emerson’s whose husband has recently died, asks Emerson to continue Lord Baskerville’s excavation of an Egyptian tomb, he and Amelia are unable to resist. To make things even more interesting, there are suspicious circumstances surrounding Lord Baskerville’s death – and a possible link with an ancient pharaoh’s curse.

Leaving Ramses with his aunt and uncle, Amelia and Emerson head for Egypt where they begin the exciting task of excavating the pharaoh’s tomb, but soon there are more deaths and more attacks, often accompanied by sightings of a mysterious woman dressed in white. Amelia is now convinced that Lord Baskerville was murdered and that the murderer must be one of the people she and Emerson have met since their arrival in Luxor: the Irish Daily Yell reporter Kevin O’Connell maybe, or could it be Madame Berengaria, who believes she is the reincarnation of an Egyptian Queen, the rich American Mr Vandergelt, or even Lady Baskerville herself?

Beyond the actual mystery – which I found stronger and more complex than the one in the first book – there are two things I particularly liked about this book (and they are the same things I liked about the previous one). The first is the setting. Egypt is always fascinating to read about! I like the fact that although Peters herself has a PhD in Egyptology, she doesn’t go too deeply into the technical details of the subject, so that even those of us who know very little about Egyptian pharaohs, hieroglyphs or archeological digs can follow what’s happening and share in the enthusiasm Amelia and Emerson have for their work.

The second thing I love is Amelia’s narrative voice. From other people’s reviews of books in this series it seems that a lot of readers find Amelia’s strong, opinionated personality very off-putting at first. Luckily that hasn’t been a problem for me; it only took two or three chapters of Crocodile on the Sandbank for me to get used to her and start to warm to her. I think her practical, no-nonsense style fits perfectly with the entertaining plots and the ridiculous situations she finds herself in.

I enjoyed this second book as much as the first, although I did find the two very similar and while I’m looking forward to the third, The Mummy Case, I am concerned that they might lose their appeal unless I try to space them out. However, I have another sixteen or seventeen books to go, I think, so I’ll try not to let too much time go by before picking up book three! I can’t wait to get to know Ramses better in future books. He’s still just a lisping baby in this book but I’m looking forward to him being old enough to join Amelia and Emerson in their adventures!

12 thoughts on “The Curse of the Pharaohs by Elizabeth Peters”