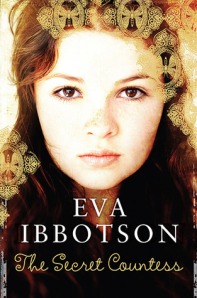 The Secret Countess (also published as A Countess Below Stairs) is set in 1919 and the title character is Anna Grazinsky, the daughter of a Russian count and countess. During the Russian Revolution, she and her mother and brother are forced to flee their home in St Petersburg for safety in England, but on the journey they lose their remaining family jewels and arrive in England with nothing. Determined to get a job so that she can help to support her family, Anna finds a position as a maid at Mersham, the estate of the Earl of Westerholme. With Selena Strickland’s The Domestic Servant’s Compendium as her guide, she settles into her new job and earns the respect and friendship of the other servants, who are unaware that she is a countess.

The young Earl, Rupert Frayne, is returning to Mersham for the first time since leaving to fight in the First World War and has announced that his fiancée, Muriel Hardwicke will soon be joining him. At first the Fraynes, their friends and their servants are pleased with the news of Rupert’s forthcoming marriage because Muriel is a rich heiress and her money means that the future of Mersham will be safe. But while Rupert is awaiting Muriel’s arrival, he notices the new Russian housemaid and finds himself falling in love.

It was not hard to predict what was going to happen in The Secret Countess! From the beginning it was obvious how it was going to end, but that didn’t make the book any less enjoyable. After finishing the dark and disturbing Gretel and the Dark I wanted something light and gentle to read next and this book was the perfect choice. I thought it was a lovely story with a magical, fairy tale quality and an old-fashioned feel (the book was first published in 1981 but could have been much older than that). The romance between Anna and Rupert is a subtle, understated one and doesn’t ever really dominate the story, but I never doubted that there would be a happy ending and that they would somehow overcome the obstacles in their path.

While my preference is usually for books that are less predictable and with characters that are more complex and nuanced (most of the characters in this book are either completely ‘good’ or completely ‘bad’ with nothing in between) that didn’t really bother me this time. Anna could easily have been one of those sickening heroines who is too good to be true – she’s beautiful, generous, sweet, kind and loving – but I couldn’t help liking her anyway. In the same way, the character who turns out to be the villain of the novel is horrible in every way, yet perfect in the context of the story. Another of the strengths of this book is its wonderful supporting characters. My favourite was the Honourable Ollie Byrne, the little girl who loves life despite its unfairness towards her, but all of the others are given a distinctive personality of their own too – even Rupert’s dog, Baskerville.

If I’ve understood correctly, this book was originally written as a book for adults but has now been repackaged to appeal to YA readers. I honestly think this is a book that could be equally enjoyed by both adults and younger readers and it would be a shame if anyone missed out on reading it because it has been marketed in a certain way. This is only the second book I’ve read by Eva Ibbotson (the other was Madensky Square) and I’m pleased that I still have so many of her other books to explore!

17 thoughts on “The Secret Countess by Eva Ibbotson”