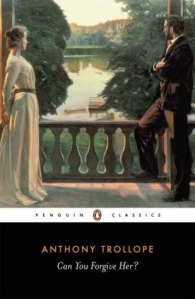 This was the book chosen for me by the recent Classics Club Spin and yet again the Spin has been very good to me by selecting a book that I loved. Can You Forgive Her? is the first in Anthony Trollope’s Palliser series and based on this one I can’t wait to read the other five. Before starting this book, the only Trollopes I had read were his six Barsetshire novels and I felt so comfortable in that world that I was slightly worried about venturing away into the unknown world of the Pallisers. I needn’t have worried, of course, because as usual with a Trollope novel, I was completely drawn into the lives of the characters and enjoyed all 690 pages!

Like the other Trollope novels I’ve read, this one has several different storylines running alongside each other, meeting and intersecting occasionally. First we have the story of Alice Vavasor, the woman whom Trollope is asking whether we can forgive. Alice is twenty-four years old and at the beginning of the novel she is engaged to be married to John Grey, a country gentleman from Cambridgeshire. But there is also another man in Alice’s life – her cousin, George Vavasor, with whom she was romantically involved several years earlier. John is a good, honourable, dependable man, though slightly bland and boring, but he truly loves Alice, whereas the selfish, untrustworthy George only seems to be interested in using her money to further his political career. Throughout the book Alice wavers between John and George and even after it becomes obvious to the reader which of them she should choose, her own nature makes the decision much more complicated than it should have been.

We also meet Alice’s cousin and best friend, Kate Vavasor (George’s sister), who would love to see Alice marry her brother and decides to do everything she can to influence Alice’s decision. Kate herself has no plans to marry and spends a lot of time with her Aunt Greenow, a rich widow who has two rival suitors of her own, Captain Bellfield and Mr Cheeseacre. Cheeseacre, a farmer, is in the better financial position of the two and believes he has more to offer a wife, but Mrs Greenow makes no secret of the fact that she prefers the poorer but more attractive Bellfield and it seems that Cheesacre is the one who is going to be disappointed.

The third storyline involves the Pallisers themselves. Plantagenet Palliser is a politician who is devoted to his work and is considered to have a good chance of becoming Chancellor of the Exchequer. His young wife, Lady Glencora, is another cousin of Alice Vavasor’s. Before their marriage, Glencora was in love with the handsome but irresponsible Burgo Fitzgerald, and as she struggles to understand her new husband, she realises she may have made a big mistake. She and Burgo are still part of the same social circle and when he tells her that he still loves her, Glencora must decide whether to run away with him or whether to stay with her husband and try to make their relationship work.

Whereas the Barsetshire novels revolve around the church and the lives of clergymen and their families, the focus in this series is on the lives of politicians. This hadn’t initially sounded very appealing to me, but luckily I found that the level of political detail in this book was easy enough to follow and understand. I don’t know a lot about the way parliament worked in the 19th century but the thing that does come across very clearly is how corrupt the system was, where a man like George Vavasor, for example, could simply try to buy his way into parliament whether he was actually a good candidate or not.

One of the things I really love about Trollope is the way he makes me care so much about each of his characters, even the ones who seem uninteresting or unsympathetic earlier in the book. As he moves from one character’s perspective to another, he changes my perceptions of each one. In the case of Plantagenet Palliser, for example, I was inclined to agree with Glencora that he was dull and boring and indifferent to his wife’s feelings – until Trollope allows us to get inside Palliser’s head for a while and we see that he does care about his wife after all and is prepared to make huge sacrifices on her behalf.

I think Trollope shows a good understanding in this book of the choices and difficulties facing women, though he offers no real alternatives other than marriage and after a certain point in the book, the outcome of each storyline becomes quite predictable. Each one features a woman forced to choose between two men – one who is respectable but not very exciting and the other who is less respectable but more exciting. However, the way in which each woman deals with the situation she is in varies depending on her personality and her experience of life.

So, to go back to the question the title poses: could I forgive Alice? Well, I could forgive her for vacillating and having doubts and struggling to make up her mind. I understood that although she loved John Grey she was frustrated by what she saw as a lack of passion and ambition and that she wanted to feel she was doing something worthwhile with her life. I found it harder to forgive her for some of the ridiculous decisions she made regarding her money and who to give it to. But really, I don’t think she was in any more need of forgiveness than most of the other characters in the book as they all made mistakes and all had their flaws.

This post is starting to get very long and I haven’t even mentioned the fox hunt, Aunt Greenow’s picnic, the disputed will or the two trips to Switzerland! This is definitely one of my favourite Trollope novels so far and I’m now looking forward to reading the rest of the Pallisers, starting with the second in the series, Phineas Finn.

22 thoughts on “Can You Forgive Her? by Anthony Trollope”