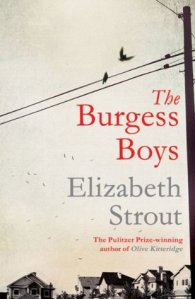 Although the title of this novel is The Burgess Boys, there are actually three Burgess siblings – Jim, Bob and their sister Susan. Jim and Bob live in New York, while Susan is the only one to have remained in Shirley Falls, Maine – the town where they grew up. Jim is an ambitious and successful lawyer, whose defence of the singer Wally Packer has made him a household name. His younger brother, Bob, also has a career in the law but has never matched Jim’s achievements; he has spent his whole life blaming himself for an accident which killed his father, and as a result he doesn’t have a lot of confidence. Susan, Bob’s twin, is a single mother living in Shirley Falls with her troubled teenage son, Zach.

Shirley Falls, predominantly a white community, has recently become home to large numbers of Somali immigrants. Racial tensions in the town are already high and when Zach throws a frozen pig’s head through the door of a mosque during Ramadan, it causes a national scandal. Jim and Bob return to the town of their childhood to support their sister and find out why their nephew has done something so terrible, but in the process they make some surprising discoveries about themselves and about each other.

I received a review copy of this book from the publisher last year but didn’t read it as it didn’t sound very appealing to me and as I hadn’t requested it I didn’t feel under any obligation to read it if I didn’t want to. I do remember reading some positive reviews of it, though, and when I noticed it was named on the shortlist for the Baileys Women’s Prize for Fiction I decided to give it a try. Now that I’ve read it I think my initial reaction was correct because it really wasn’t my type of book at all; I was interested enough to keep reading right to the end and I appreciated the quality of Elizabeth Strout’s writing, but this was a book that I could admire without particularly enjoying.

I found this quite a subdued and depressing novel. All of the characters, even the secondary ones, seem to be such unhappy people, dissatisfied with their lives, their marriages and their jobs. With the possible exception of the good-natured Bob Burgess and one of the Somali characters, Abdikarim Ahmed, I didn’t like any of them. I thought Susan was cold and bitter, Jim was over-confident and insensitive, and Helen (Jim’s wife) was shallow and self-absorbed. There’s certainly a lot of character development and by the end of the book it’s obvious that there is more to each person than originally meets the eye – but they are simply not people that I had much interest in getting to know.

I do think it was a good idea to write part of the novel from the perspective of the Somali immigrants. I was struck by the way so many of the non-Muslim people in Shirley Falls, while not necessarily racist, seem to have almost no knowledge of Islamic culture or the customs of the Somali people who are living among them (they incorrectly refer to them as Somalians, for example, and in some cases have never heard of Ramadan and don’t know why a pig’s head might be offensive to a Muslim). However, I never felt I completely understood Zach and why he did what he did, although the author does her best to make us feel sympathetic towards him by portraying him as a shy, awkward teenager who (slightly unbelievably) was unaware of the implications of his actions.

The Burgess Boys is a thought-provoking read and a good portrayal of a dysfunctional family, but I found the story disappointingly flat and boring, lacking any sort of drama or interesting plot developments. However, despite not enjoying this book very much I haven’t ruled out trying one of Elizabeth Strout’s other books at some point, particularly Olive Kitteridge which sounds much better than this one.

4 thoughts on “The Burgess Boys by Elizabeth Strout”