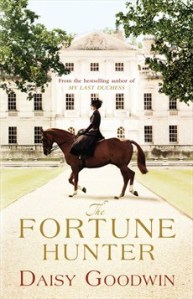 Set in 1875, this is the story of two women and their love for the same man, Captain Bay Middleton, a cavalry officer and renowned horseman. One of these women is Charlotte Baird, heiress to a fortune, whose brother is a friend of Bay’s from the army. Bay asks Charlotte to elope with him but she convinces him that it will be best to wait nine months until she comes into her inheritance. However, this could be a mistake because in the meantime the Empress Elizabeth of Austria and her retinue arrive at nearby Easton Neston for the hunting season.

Elizabeth – or Sisi, as she is known to her friends – is the wife of Franz Joseph of Austria. Bored with her marriage and with constantly being in the public eye, Sisi is looking forward to spending some time in the English countryside riding and hunting. Sisi is an excellent horsewoman herself, and when Bay Middleton is given the job of acting as her ‘pilot’ (or guide), she and Bay find that their shared passion for horses leads to passion of a different sort. They are unable to keep their affair secret and when people begin to gossip about the Empress and her relationship with her pilot, Bay must decide whether his fascination with Sisi is more important than his love for Charlotte and his dream of winning the Grand National.

This novel is based on a true story – Sisi, Bay and Charlotte are all people who really existed – but it’s probably not one that many people will be familiar with. I certainly wasn’t. However, having read the author’s note and also the small amount of information I could find online, it seems that The Fortune Hunter is largely fictional and only loosely based on the real life story. There are some significant differences, such as the fact that the events of the novel take place over just a few months while in reality, Bay was Sisi’s pilot for five years. But whether or not the characters and their actions were completely true to life, it didn’t matter to me because the author made them feel so real and made me care about them so much that I found myself thinking about them even when I wasn’t reading the book.

The Empress Sisi, who I admit I knew nothing about before starting this book, must have been a fascinating woman. She was also known as a woman of great beauty and I was interested to read about how she would have her floor-length hair tied to the ceiling at night to relieve the pressure of its weight on her head and how she would cover her face in strips of raw meat to freshen her complexion. I particularly enjoyed a scene in the novel where Sisi meets and makes conversation with Queen Victoria, a very different type of monarch with very different views!

Although I was unable to find out anything about the real Charlotte Baird beyond her name, the fictional Charlotte is another character I loved. I enjoyed reading about her experiments with photography, a hobby that in Victorian England was not considered entirely appropriate for a young woman. But the character I was drawn to the most was Bay Middleton. I never doubted that he loved Charlotte but it was easy to see how he became captivated by the Empress and why he was ashamed of his behaviour while at the same time being unable to stop himself. It was not clear to me what the outcome of the story would be for Bay, for Charlotte or for Sisi and I was kept in suspense until the final chapter.

There are also some great secondary characters including Caspar Hewes, a flamboyant American photographer; Augusta Crewe, who is engaged to Charlotte’s brother; and Chicken Hartopp, a disappointed suitor of Charlotte’s. Another favourite was Bay’s grey mare, Tipsy – I thought the relationship between Bay and his horse was well written and very touching. There’s a lot of period detail too and the setting feels believably Victorian, with no irritating anachronisms or language that feels inappropriately modern.

This is a long novel (there were more than 600 pages in the version I read) but I was so engrossed in the story that I didn’t really notice the length. I loved this book and now I need to find a copy of Daisy Goodwin’s first novel, My Last Duchess.

6 thoughts on “The Fortune Hunter by Daisy Goodwin”