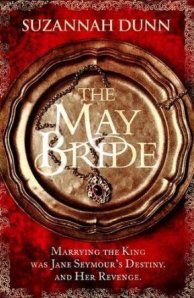 One day in May 1536, Jane Seymour became Henry VIII’s third wife – but she is not the only May bride in Suzannah Dunn’s new novel. The other is Katherine Filliol, the wife of Jane’s elder brother, Edward. Jane is only fifteen when Edward first brings Katherine to Wolf Hall, the Seymour family home, and she is instantly captivated by her beautiful new sister-in-law. Jane and Katherine become close friends – or so Jane thinks, but gradually she discovers that Katherine has been keeping secrets from her and that her marriage to Edward may not be as perfect as it first appeared.

I had my doubts about this book before I started reading it because I had tried to read another of Dunn’s books a few years ago, The Confession of Katherine Howard, and didn’t get very far with it before giving up, not having connected with the writing style or the characters at all. I wondered if I would have the same experience with this book, but luckily that didn’t happen; I found this one much more enjoyable and easier to get into.

I’ve read a lot of novels set during the Tudor period, but this one is slightly different, for several reasons. First, it is a very domestic story, being set almost entirely at Wolf Hall with only the final, shortest section of the book covering Jane’s time at court as lady-in-waiting to Katherine of Aragon and Anne Boleyn. Until that last section there are so few mentions of politics, court intrigues or famous people of the period (apart from the Seymours themselves) that it could almost have been a story about any other wealthy Tudor family going about their daily lives.

I also found it intriguing that although Jane is the most famous Seymour and the one who is narrating, this novel is actually about Katherine Filliol as much as it is about Jane. I didn’t know anything about Katherine before reading the book and although Suzannah Dunn admits in her author’s note that there is very little historical information available on Katherine (and no record of what eventually happened to her) I still appreciated the fact that she had chosen to focus on a little-known character who is not usually the subject of historical fiction.

Finally, this book is written in a style that feels very modern and there is no real attempt to use language appropriate to the period. This is something that usually irritates me, but in this case I think it actually worked quite well once I got used to it. Because this is a family drama, with the emphasis on exploring the relationships between Katherine, Jane and the other Seymours, the fresh and contemporary feel made it easy to identify with the characters. I thought Jane’s brothers, Edward and Thomas, with their very different personalities, were particularly well drawn.

Compared with some of Henry VIII’s other wives, Jane Seymour as queen is often portrayed as quiet and uninteresting but here the young Jane comes to life as a loyal and loving person who is able to see the best in everyone. Unfortunately I didn’t share her fascination with Katherine, but I suppose that’s because I was able to pick up on clues and nuances that wouldn’t have been obvious to an innocent fifteen-year-old girl who is dazzled and enchanted by her new friend.

Although I maybe haven’t learned as much about Jane as I would have done from a more conventional historical novel, I did enjoy reading about her early life and the experiences that shaped the woman and queen she would become.

4 thoughts on “The May Bride by Suzannah Dunn”