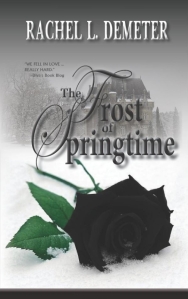 When I was offered the opportunity to take part in a blog tour for Rachel L. Demeter’s The Frost of Springtime, I wasn’t sure whether or not to accept. I read a lot of historical fiction novels and many of them have an element of romance, but I tend not to be drawn to books that are specifically classed as ‘historical romance’ as this one is. The setting sounded intriguing, though, so I decided to give it a try.

The Frost of Springtime is set during the Paris Commune of 1871, a brief period during which a revolutionary government ruled Paris. The novel begins with Vicomte Aleksender de Lefèvre rescuing a young girl, Sofia Rose, who has been sold into a Parisian brothel by her own mother. Sofia becomes Aleksender’s ward but she is later separated from her guardian while he goes away to fight in the Franco-Prussian War.

When Aleksender returns to Paris accompanied by his friend, Christophe Cleef, he finds that the city has been torn apart by revolution, protest and destruction. At home, too, things are changing. His father’s death has left him with new responsibilities and an altered relationship with his brother…and the little girl he saved from a life of misery and abuse has matured into a beautiful young woman of nineteen. Left scarred by his traumatic wartime experiences, Aleksender is in need of love and comfort and it seems that Sofia can provide them. But what about his wife, Elizabeth, the woman he married years earlier as part of an arranged marriage and has never loved the way he loves Sofia?

The Frost of Springtime is a dark and atmospheric story with some great descriptions of a Paris in political turmoil. Although there is certainly a strong romantic thread running through the centre of this novel, there is also quite a lot of history. In fact, there could be too much history for those who are looking purely for a love story, but for me personally the balance was about right. I had no previous knowledge of the Paris Commune and now that I’ve learned a bit about it from reading this book I would like to know more. I may have to do some further reading on the subject!

Aleksender and Sofia were both strong characters – characters I was interested in and cared about. Unless you just don’t like the idea of the age difference or a man falling in love with a girl who had been his ward, I’m sure you’ll feel the same and will be hoping for a happy ending for the two of them. However, I did also like Elizabeth and had a lot of sympathy for her as she really hadn’t done anything wrong and didn’t deserve to be treated badly. Aleksender’s behaviour sometimes disappointed me because it wasn’t always what you would expect from the hero of a romantic novel but this could be partly explained by the fact that he is suffering from what appears to be post-traumatic stress disorder caused by his experiences at war.

I’m glad I didn’t let my doubts about historical romance put me off reading this book as I did enjoy meeting Aleksender and Sofia and learning about such an interesting period of French history.

If you’d like to read more reviews, interviews and guest posts please see the tour schedule at Enchanted Book Promotions – and don’t forget to enter the tourwide giveaway for an Amazon gift card at this link: a Rafflecopter giveaway

7 thoughts on “The Frost of Springtime by Rachel L. Demeter”