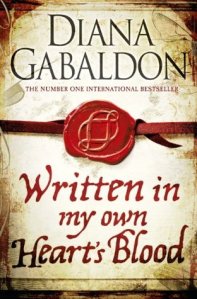 Diana Gabaldon seems to polarise readers like no other author. It’s rare to find anyone who has read one of her novels and didn’t feel strongly about it one way or the other! I do completely understand the reasons why people would dislike her writing, but I admit that I’ve always loved her Outlander series, at least until the last couple of books. I think I was about eighteen when I read Gabaldon’s first novel – Cross Stitch as it was called here in the UK, and I immediately went on to read the next three books (there were only four in the series then). Since then I’ve read each new book as it was published. The seventh volume, An Echo in the Bone (which happens to be the very first book I reviewed on this blog in 2009), left me feeling a bit disappointed, but sadly this new one has disappointed me even more, especially after a five year wait.

In some respects I think Gabaldon has improved as a writer over the course of the series, but the later books just don’t compare to the earlier ones in any of the other ways that matter to me – in plot, structure, characterisation or emotional impact. I’m not sure whether it’s just that my tastes have changed over the years, but I think the shift in narrative structure from being mainly narrated by one character in the first person to being told from multiple perspectives might also have something to do with it. And then there’s the fact that while the earlier novels are set mostly in Scotland during the 1745 Jacobite Rising and its aftermath, the later ones are set during the American Revolution, a period I’m not as interested in. Whatever the reason, these books are starting to lose their appeal for me. I’ll still be following the series to its end, though – I’ve invested far too much time in it to stop now!

Anyway, on with my thoughts on Written in My Own Heart’s Blood. This review is as spoiler-free as I could make it but as it refers to the eighth book in a series you may prefer not to read any further until you’ve caught up with the first seven books. At this point I should say that if you’re not already familiar with this series, then you really need to start at the beginning or you’ll get hopelessly confused!

If you remember, the previous book, An Echo in the Bone, ended on more than one cliffhanger and thankfully Written in My Own Heart’s Blood picks up immediately where Echo left off. There are two main threads to the novel. First, we follow Jamie, Claire and their assorted friends and family members who are all now based in Philadelphia. The year is 1778 and we are in the middle of the Revolution, with all the dangers and complications that brings. In the novel’s other strand, we return to Lallybroch in Scotland to catch up with Brianna and Roger who are having some exciting adventures of their own.

I really wanted to love this book but unfortunately I experienced a lot of the same problems with this one that I had with Echo. Both books seem to be dominated by characters and storylines from Gabaldon’s spin-off Lord John series – and I gave up on that series after two books. Ideally, I would have preferred the Lord John characters to stay in the Lord John books and the main Outlander series to concentrate on Jamie, Claire and the other characters we already know and love, such as Fergus and Marsali and their children or Ian Murray and Jenny. It seemed strange to me, for example, that we see so little in this book of Jenny interacting with Ian, the son she hasn’t seen for years, yet so much time is devoted to a search for Lord John’s nephew, Ben, a character who I can’t even remember being mentioned in previous books.

I don’t want to sound completely negative, because the good parts of Written in My Own Heart’s Blood are very good, but overall I thought the book lacked focus and because there are so many different storylines all running parallel with each other, it was inevitable that I would struggle to care about them all, particularly the ones dealing with characters I don’t really like. Many of the things that happen in the book feel superfluous and seem to have no real purpose other than to make a very long book even longer: a storyline involving two young girls William takes under his protection, an operation Claire performs on a slave with an unpleasant medical condition, and the death of a character which I found totally unnecessary.

The military aspect of the book was another problem for me, but I’ll admit that my lack of knowledge of this period of American history is probably to blame. I couldn’t keep track of the various Generals and Colonels and which side they were on, and whenever Claire met a presumably famous historical figure of the period I didn’t feel the excitement I was obviously intended to feel. My fault, though, not the author’s.

On the other hand, I thought Roger and Brianna’s parts of the book were fantastic! It was great to meet characters I’d never expected to meet again. These sections were much more compelling than the rest of the book, something I never thought I would say! While I’ve always liked Roger I could never quite warm to Bree and have often been impatient with the amount of time devoted to them in some of the previous books – but not this time. I was disappointed that only two out of the novel’s nine parts follow Roger and Bree and their children…I didn’t want their story to come to an end.

So, I’ve been left with very mixed feelings about this book and am sorry I’ve had to post a less than glowing review of a book by an author I used to consider one of my favourites. I did love the final few pages, though, because what I had been desperately hoping would happen did happen! If I didn’t already know that there’s going to be a book nine I think I would have been happy for this to have been the end of the series, even though there are still some storylines left unresolved. Based on past experience, I suspect we’ll have to wait four or five years to read the ninth, and probably final, book. I’m sure I’ll be reading it, despite my problems with this one, and am hoping for a satisfying conclusion to the series.