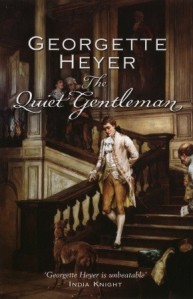 When Gervase Frant, 7th Earl of St Erth, returns to his family estate of Stanyon Castle after fighting in the Peninsular War, he doesn’t receive quite the welcome he’d hoped for. His cousin Theo seems pleased to see him but his stepmother and younger half-brother, Martin, give the impression that they would have been happier if he’d never come home at all. Soon after his arrival, a series of accidents start to befall the Earl – but are they really just accidents or are they attempts on his life?

I still have a lot of Georgette Heyer’s books left to read (I haven’t even read half of them yet) but this is one of my favourites so far. It’s probably not what most people would consider a typical Heyer novel, being more of a mystery than a romance, but I think that’s one of the reasons I enjoyed it so much. I didn’t find the mystery particularly difficult to solve (there were really only two or three people who could have had a motive for wanting St Erth dead) and I guessed the culprit quite early in the book, but this didn’t affect my enjoyment of the story as there was still a chance that I could have been wrong! I think this would be a good book to re-read as I’m sure there must have been lots of little clues that I missed.

The romantic element may not be as strong in this book as in some of Heyer’s others but it is still there and I actually thought it was all the more convincing for being slow, subtle and understated. In fact, it’s so slow, subtle and understated that even the hero and heroine don’t acknowledge their love for each other until near the end of the book, although it was obvious to me that they were perfectly suited. She is my favourite type of heroine – intelligent, sensible and practical – and the only problem is that we don’t see enough of her as she tends to stay in the background throughout most of the novel. This is in contrast to the other main female character, a lively, pretty girl who has every man from miles around fighting over her (sometimes literally).

While I’m on the subject of female characters, I should also mention St Erth’s stepmother, the Dowager Countess, who could almost have come straight from the pages of a Jane Austen novel! As for the men, the Earl himself is another great character: with his calm, softly-spoken manner and slim build, fair hair and love of fashion he may at first appear to be ‘nothing but a curst dandy’ as Martin describes him, but his family soon discover that appearances can be deceptive and that there is much more to Gervase than meets the eye.

I loved the setting too. Most of the action takes place within Stanyon Castle (a mansion complete with ‘Great Halls, Minstrels’ Galleries, Armouries, Towers and Moats’) and in the surrounding Lincolnshire countryside – which proves to be a very dangerous place for the Earl! The setting, together with the air of mystery, is what made this book feel slightly different from most of the other Heyers I’ve read (I thought there were some similarities with Cousin Kate, though that one is more gothic). However, there are still all the other elements you would expect to find in one of her Regency novels: balls, horses and carriages, fencing, men with snuff boxes and quizzing glasses, women dressed in satin and lace – as well as the usual humour and witty dialogue.

Now I’m wondering which of Heyer’s novels I should read next. I still have so many to choose from it can sometimes feel overwhelming!

13 thoughts on “The Quiet Gentleman by Georgette Heyer”